Famous Polaris Lounge to Reopen in 2014 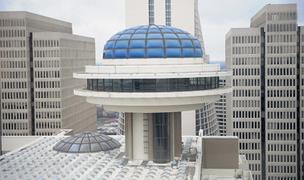 It was the landmark blue dome atop what looked like a flying saucer. In reality, it was the dome of a restaurant atop what was once Atlanta’s tallest hotel.

Before the Westin Peachtree Plaza was built in the mid 70’s this dome was the city’s most recognizable visual points of interest. It was called Polaris, it graced the covers of countless post cards, and was instantly recognizable.

Vacant since 2004 the dome is on its way back, as the restaurant/lounge is set to reopen in early spring. Officials with the renovation project say the restaurant will feature menu items from 1967, the year the Polaris Lounge first opened.

The Top Sneakerheads in Georgia