This Sunday marks the 15th anniversary of the September 11th attacks. Last weekend, two morons thought that it would be funny to mock the tragic incident. Their deplorable costumes included people hanging out of the windows and jumping to their death.

The couple from Atlanta wore the costumes and finagled their way into one of the convention centers housing part of the world renown Dragon Con. Officials and actual attendees have confirmed that they did not purchase/have a badge. So it’s clear to see they were looking to stir the pot and churn up some controversy. Luckily, they got a steaming serving of karma served on a hot plate. 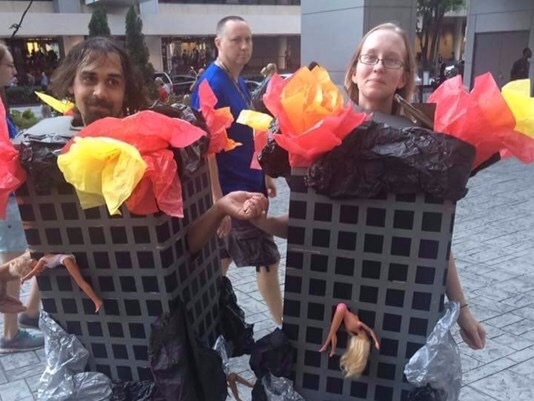 Several actual Dragon Con attendees snapped photographs of the unnamed couple, reported them to event security and posted it all over the internet. It quickly went viral, and like the faces in the background of the pictures, people everywhere were disgusted.

The couple took off after they realized security was after them. They weren’t actual attendees, so they were not permitted to be in the facility to begin with. They escaped without physical violence, but their presence lives on in internet infamy. Their vile behavior will forever be attached to their faces.

What do you think about their costumes? Leave a comment below.