Just as Americans were getting used to the idea of “murder hornets” in the U.S., officials are warning that an invasive lizard that can grow to up to 4 feet long has established itself in two Georgia counties.

The Argentine black and white tegus, which are not native to the U.S., were first spotted in Florida — but now, officials believe the lizards have established themselves in Toombs and Tattnall counties in Georgia, John Jensen of the Georgia Department of Natural Resources’ Wildlife Conservation section said in a YouTube video.


GiJensen explained that wildlife officials are working to remove the lizards, because they could have a negative impact on native species. “They eat just about anything they want, plant and animal matter. And one of their favorite foods are eggs from ground nesting animals, such as gopher tortoises, our protected state reptile,” he said. Tegus also eat eggs from birds like turkey and quail, Jensen said, and could potentially take over the homes of burrowing animals, like gopher tortoises. 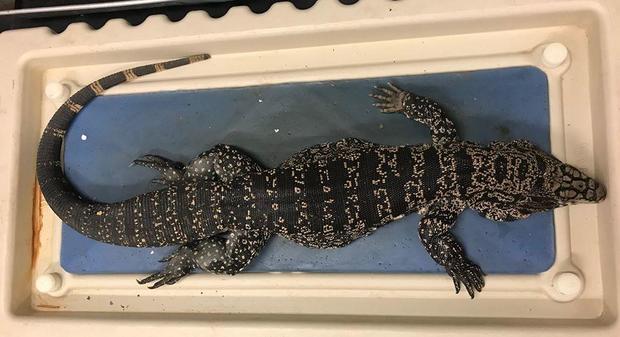 Jensen encouraged locals to report any tegu sightings online, to help officials’ efforts in tracking and removing them. “If you’re able to safely and humanely dispatch of the animal, we encourage that and we want that information, too,” Jensen said.

The lizards are generally black and white and can get up to four and a half feet long, leading many to believe they are baby alligators, Jensen said. He also said anyone who has kept a tegu as a pet and no longer wants it should turn it in to a reptile adoption group. “Releasing it into the wild is the absolute worst thing to do, it will affect our native species and we can’t have that,” he said.

The Orianne Society, which is dedicated to the conservation of reptiles and amphibians, also put out a warning about the invasive lizards. “Established from escaped or released pets, these large lizards are voracious predators that have been found consuming a variety of native wildlife in the longer-established Florida populations,” the Orianne Society wrote on Facebook.


After appearing in Georgia for three years, the society said it believes tegus are able to survive the state’s cold winters, meaning their population has the potential to spread rapidly. “It is critical to remove invasive species early in the invasion process to have the best chance of success,” the society said. “All sightings should be immediately reported to Georgia DNR.”

Tegus are not the only invasive species of recent concern. So called “murder hornets” have made their way to the U.S. for the first time, researchers said. The Asian giant hornet, Vespa mandarinia, has been known to kill up to 50 people a year in Japan, according to The New York Times, and has the potential to devastate U.S. bee populations, which have already been declining.

Two of the wasps — the world’s largest hornet species — were discovered late last year in Washington state, and scientists have since been trying to track the invasive insects to eradicate them.