Atlanta-area police are searching for an attorney who was last seen last Friday night, and hasn’t been in touch with family since then.

Demetrice Allen, a 30-year-old attorney, was last seen at an area bar at around 9 p.m.

On Sunday, December 8, 2019, at approximately 8:15 A.M., the City of South Fulton Police Department responded to a call regarding a missing person. The caller said that Allen had not been seen since the previous Friday 9 p.m.


His last known whereabouts on December 6 were at Ten ATL Bar & Lounge on Flat Shoals Avenue in Atlanta.

He was last seen wearing a black jacket, tan shirt, black jeans and black Jordan sneakers. He drives a gray BMW 328i with Ohio tag HMT1084.

Detectives are currently investigating leads to attempt to locate Allen. 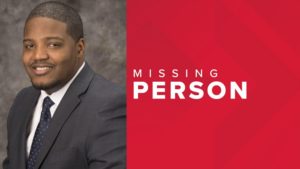