After going to many a beer festival in Georgia, I’ve realized that there are SO MANY different breweries in our great state. Not only that, nobody knows about them. One of my favorite breweries that has come up with one of my favorite summer beers is Pontoon Brewing Company. Here’s everything that you need to know (for now) and what you can expect from one of  Atlanta’s newest breweries. 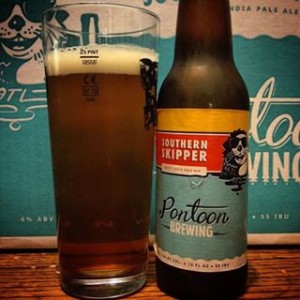 Pontoon Brewing launched this year, by two great, longtime friends who wanted to create a beer that embodies a “good time.” They were two people that loved being on the water, whether it was the Chattahoochee river, Lake Lanier or on the beach on Tybee Island. Each of the beers are light and smooth, whether they are the Freedom Bird American Strong Ale, or the No Pants Pilsner.

“The motivation for starting Pontoon Brewing is the sheer enjoyment/fascination of brewing different styles of beers and the positive response from those who drank them. We originally created “Pontoon” beers after the lifestyle of relaxing on a Pontoon boat with friends and family while drinking some delicious brews.” We reached out to them on their Facebook page.

The Atlanta brewery has made appearances at many beer festivals this year including the Summer Beer Festival this past June and the Brookhaven Beer festival. Every one of Pontoon’s team members encompass the laid back lifestyle, and consumers are following suit!

“Our future is extremely exciting. Right now we are brewing at a partner brewery and the next item on our to do list is finding a location of our own to build Pontoon Brewery. We are looking to open a location in the Brookhaven/Chamblee area. Hopefully we’ll find something soon!”

Shades On, Bottoms Up!