What You Need to Know About Georgia’s New Abortion Law

On Tuesday, Georgia Republican Gov. Brian Kemp signed a “fetal heartbeat” bill that seeks to outlaw abortion after about six weeks. The measure, HB 481, is the most extreme abortion ban in the country—not just because it would impose severe limitations on women’s reproductive rights, but also because it would subject women who get illegal abortions to life imprisonment and the death penalty.

The primary purpose of HB 481 is to prohibit doctors from terminating any pregnancy after they can detect “embryonic or fetal cardiac activity,” which typically occurs at six weeks’ gestation. But the bill does far more than that. In one sweeping provision, it declares that “unborn children are a class of living, distinct person” that deserves “full legal recognition.” Thus, Georgia law must “recognize unborn children as natural persons”—not just for the purposes of abortion, but as a legal rule.

This radical revision of Georgia law is quite deliberate: The bill confirms that fetuses “shall be included in population based determinations” from now on, because they are legally humans, and residents of the state. But it is not clear whether the bill’s drafters contemplated the more dramatic consequences of granting legal personhood to fetuses. For instance, as Georgia appellate attorney Andrew Fleischman has pointed out, the moment this bill takes effect on Jan. 1, 2020, the state will be illegally holding thousands of citizens in jail without bond. That’s because, under HB 481, pregnant inmates’ fetuses have independent rights—including the right to due process. Can a juvenile attorney represent an inmate’s fetus and demand its release? If not, why? It is an egregious due process violation to punish one human for the crimes of another. If an inmate’s fetus is a human, how can Georgia lawfully detain it for a crime it did not commit? 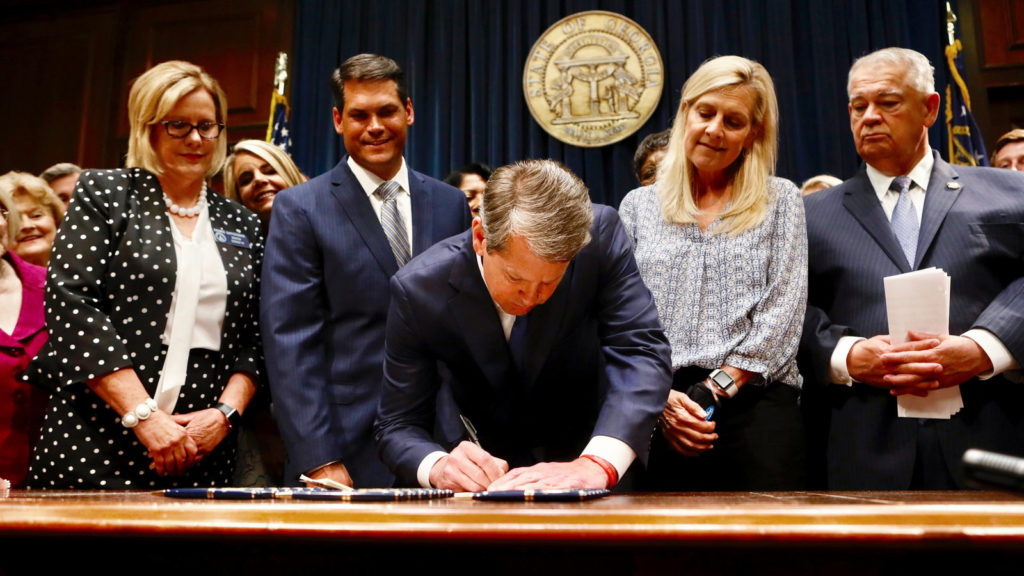 But the most startling effect of HB 481 may be its criminalization of women who seek out unlawful abortions or terminate their own pregnancies. An earlier Georgia law imposing criminal penalties for illegal abortions does not apply to women who self-terminate; the new measure, by contrast, conspicuously lacks such a limitation. It can, and would, be used to prosecute women. Misoprostol, a drug that treats stomach ulcers but also induces abortions, is extremely easy to obtain on the internet, and American women routinely use it to self-terminate. It is highly effective in the first 10 weeks of pregnancy. Anti-abortion advocates generally insist that they do not want to punish women who undergo abortions. But HB 481 does exactly that. Once it takes effect, a woman who self-terminates will have, as a matter of law, killed a human—thereby committing murder. The penalty for that crime in Georgia is life imprisonment or capital punishment.

HB 481 would also have consequences for women who get abortions from doctors or miscarry. A woman who seeks out an illegal abortion from a health care provider would be a party to murder, subject to life in prison. And a woman who miscarries because of her own conduct—say, using drugs while pregnant—would be liable for second-degree murder, punishable by 10 to 30 years’ imprisonment. Prosecutors may interrogate women who miscarry to determine whether they can be held responsible; if they find evidence of culpability, they may charge, detain, and try these women for the death of their fetuses.


Even women who seek lawful abortions out of state may not escape punishment. If a Georgia resident plans to travel elsewhere to obtain an abortion, she may be charged with conspiracy to commit murder, punishable by 10 years’ imprisonment. An individual who helps a woman plan her trip to get an out-of-state abortion, or transports her to the clinic, may also be charged with conspiracy. These individuals, after all, are “conspiring” to end of the life of a “person” with “full legal recognition” under Georgia law.

It is entirely possible that Georgia prosecutors armed with this new statute will bring charges against women who terminate their pregnancies illegally. In 2015, a Georgia prosecutor charged Kenlissia Jones with murder after she self-terminated; he only dropped the charges after concluding that “criminal prosecution of a pregnant woman for her own actions against her unborn child does not seem permitted.” Starting in 2020, however, Georgia law will permit precisely this kind of prosecution. There is no reason to doubt that history will repeat itself, and more prosecutors will charge women who undergo abortions with murder.

For now, Supreme Court precedent protecting women’s reproductive rights should bar such prosecutions—and indeed, require the invalidation of HB 481. But the court’s conservative majority may be on the verge of dismantling Roe v. Wade. If that happens, Georgia and other conservative states will be free to outlaw abortion, and to imprison women who self-terminate. HB 481 is further proof that once Roe is gone, it won’t just be abortion providers who risk legal jeopardy: Women will be punished, too.