A magical night for a great cause. It’s time once again, for the Atlanta Moon Ride.

The 2018 Atlanta Moon Ride is slated for Friday, June 8th at Piedmont Park. 100% of the proceeds will support the work of local charity Bert’s Big Adventure. Excitement is building.

The festivities include a pre-party in Piedmont Park at 7 p.m., followed by a lively, 6-mile bike ride through some of Atlanta’s coolest neighborhoods at 11 p.m. Costumes are encouraged!

This year’s Atlanta Moon Ride on Friday, June 8th and there is a lot of fun in cards for all attendees.

Tonight, Friday, at midnight is the deadline to be guaranteed one of the coveted shirts but we order extra shirts, but they’ll be available on a first-come, first-served basis at check-in.

The ﬁrst night-cycling event of its kind to be introduced to the city will include a fun, 6-mile bike ride through some of Atlanta’s coolest neighborhoods. Remember, the pre-party starts at 7 p.m. and the fun ride starts at 11 p.m.

The pre-party will feature live music from Saved By The Band and a costume contest with chances to win a exclusive ticket package from Atlanta United, Round Trip Airfare for 2 with Jet Blue, and more, so this is more than just a fun bike ride.

Bert’s Big Adventure is a nonproﬁt organization that provides a magical, all-expenses-paid, ﬁve-day journey to Walt Disney World for children with chronic and terminal illnesses and their families.

Tickets start at $35 and include an ofﬁcial Atlanta Moon Ride t-shirt, entry to the festival pre-party and the 6-mile bike ride. 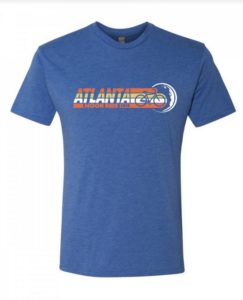 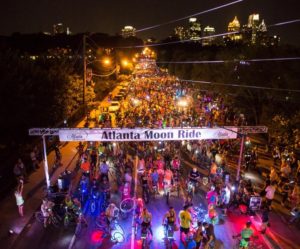 Gwinnett County To Receive Its Own ‘Atlantic Station’ in 2020