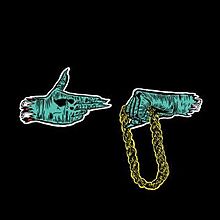 The best rap album of 2013 was released for free and you still probably haven’t even heard of it. Atlanta is known for many things: business, the vast amounts of restaurants, strips clubs, music etc. 2013 saw a lot of new rap music released into the world. ATL was infused in nearly EVERY summer anthem. What you may not know is that an Adamsville veteran released the best and possibly most overlooked album of 2013. In a year that saw releases from the likes of Jay-Z, Kanye West, Eminem, Drake, Lil Wayne and a whole slew of others, Killer Mike & longtime collaborator El-P dropped a GEM.

“Run The Jewels”, released for free this summer, is 10 tracks of pure punishing, braggadocios rhymes laced over El-P’s trademark electro-infused beats. Fresh off the release of their critically acclaimed albums in 2012 “Cure 4 Cancer” and “R.A.P. Music” the 2 trade bars like Muhammad Ali and Joe Frazier in their prime yet compliment each other perfectly. RTJ is everything us rap fans honestly expected Jay-Z & Kanye’s lopsided “Watch the Throne” to be. Mike even throws some jabs at those still watching the throne on “Sea Legs“:

Why was RTJ, a universally acclaimed album, overlooked by nearly everybody? Is it because both artists don’t fit into the mainstream? Is it because people have gotten used to the hours of dumbed-down radio/television programming and bullshit kindergarten lyrics? Whatever the reason, “Run The Jewels” deserves the spotlight it hasn’t been receiving. Download RTJ for free below. What was your favorite rap album in 2013?

The 429 Sessions: Creating a Platform for Atlanta Musicians