ATL Comic Convention and Fandemic Tour, two of the country’s premier comic conventions, announced a recent partnership that will combine resources and expertise to provide geek and pop culture fans with the ultimate fan experiences. The Fandemic Tour will come to the Georgia World Congress Center March 18-20, 2022.

“When presented with this opportunity to combine forces with Fandemic Tour, we knew it would be a once-in-a-lifetime event where both companies could bring our strengths and host one monumental pop culture and comic celebration,” stated Jeff Wright, ATL Comic Convention Co-Producer. “We are ecstatic to add celebrities, vendors, creators, and more to an already notable celebrity lineup and show. We know it will be an event where lifelong memories will be made.”

Fandemic Tour is a pop culture convention with a motto of taking care of the fans by presenting events that bring celebrities, artists, and exhibitors together in one place to create immersive programming that is both fun and educational. The Fandemic Tour hosts shows in Atlanta, Georgia; Houston, Texas; and Sacramento, California, as well as virtual events throughout the year.

“It’s with great pleasure that we partner with ATL Comic Convention to bring the Fandemic Tour to our fans,” said John Macaluso, Founder of Fandemic Tour. “Our core value of taking care of our fans aligns perfectly with the ATL Comic Convention teams’ mission, and we knew instantly that by combining our resources, we could enhance our ability to attract the biggest celebrities while creating an event that creates magic moments for fans of all ages and interests.” 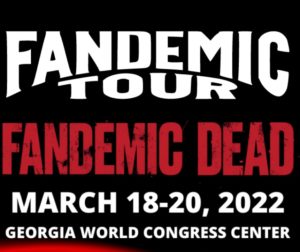