‘School of Rock’ Coming to Fox, Get Tickets Now!

School of Rock at the Fox

Coming to the Fox Theatre!

Based on the hit film, this hilarious new musical follows Dewey Finn, a wannabe rock star posing as a substitute teacher who turns a class of straight-A students into a guitar-shredding, bass-slapping, mind-blowing rock band. This high-octane smash features 14 new songs from ANDREW LLOYD WEBBER, all the original songs from the movie and musical theater’s first-ever kids rock band playing their instruments live on stage.

The hit Broadway musical will begin performances at the Fox Theatre on Tuesday, October 16 for a limited one week engagement through Sunday, October 21 as the second engagement of Fifth Third Bank Broadway in Atlanta’s 2018/2019 season.

The performance schedule is as follows: 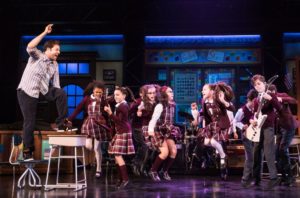 Atlanta Home to the 'Best Taxi Driver in America'

Deal declares state of emergency ahead of Hurricane Michael