Atlanta-headquartered, Cricket Wireless, has long been partners with the WWE and their stable of wrestlers. So, Monday morning, WWE’s Sasha Banks made a surprise appearance before this evening’s big event in Atlanta. Banks visited with children undergoing therapeutic rehabilitation, and their families, at Children’s at Scottish Rite. Cricket Wireless and WWE teamed up with Atlanta Ronald McDonald House Charities (ARMHC) and Children’s Healthcare of Atlanta to bring smiles to some of the patients going through day rehabilitation.

With the WWE, Banks has taken on some of the most talented wrestling professionals. She, along with Charlotte Flair also became the first women ever to win the Pro Wrestling Illustrated award for ‘Feud of the Year’.

Born in Fairfield, California, in 1992, Sasha was passionate about wrestling from an early age. She was quite enthusiastic about ‘All Japan Women’s Pro-Wrestling’, which she grew up watching. Having begun her training in 2008 at Chaotic Wrestling, based in Woburn, Massachusetts, she earned her first victory in a tag team match in January 2011. In December, of the same year, she won her first title ‘The Chaotic Wrestling Women’s Championship, after defeating Alexxis Nevaeh. It was after signing a contract with WWE in August 2012, that she adopted her ring name Sasha Banks. Since then, she has won the ‘WWE Raw Women’s Championship’ three times, the ‘NXT Women’s Championship’ once, and ‘NXT Year-End Award for Match of the Year’ in 2015. She has also appeared as a playable character in the Professional Wrestling Video game ‘WWE 2K17’. 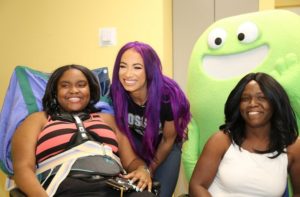 An Underground River Flows in Georgia and You NEED to Visit

MARTA Won't Be Around in 2023, Introducing New Transit System, "The ATL"