One of the great events each summer in Atlanta is the BB&T Atlanta Open. It’s world class tennis, right at Atlantic Station.

For the second time in the history of the BB&T Atlanta Open, the No. 1 and No. 2 seeds played for the championship. The first time the top two seeds met in the final was in 2013, when No. 1 John Isner defeated No. 2 Kevin Anderson. This year, No. 1 Isner again finds himself in the same situation, but this time against No. 2 seed Nick Kyrgios. A three-time defending champion, Isner holds a 23-3 record in Atlanta and is bidding for his fourth consecutive Atlanta title and a chance to extend his ATP World Tour title streak for a seventh consecutive year (since 2010).

Sunday’s meeting is also the eighth time this season that a No. 1 seed meets the No. 2 seed in an ATP World Tour final, with the top seed holding the advantage 6-1. Overall, No. 1 seeds are 16-2 in finals this season, while No. 2 seeds are 5-8.

Isner entered with a 15-match winning streak in Atlanta, with victories this week over Adrian Mannarino, Taylor Fritz and Reilly Opelka. He was playing his sixth Atlanta final and Kyrgios playing his first.

This is #NextGen star Kyrgios’ third career ATP World Tour final (1-1), and he is looking to win his second title of the season. In February, Kyrgios, then 20, became the youngest ATP World Tour winner of the season, with his maiden title in Marseille. En route to the final in his Atlanta debut, Kyrgios defeated Jared Donaldson, Fernando Verdasco and Yoshihito Nishioka.

Both players possess big serves and punishing groundstrokes, something had to give on a hot and humid Sunday afternoon.
It would be the 21-year-old coming out on top today in two tiebreakers, 7-6(3), 7-6(4) as the Aussie played exceptionally well against the three time defending champ Isner. There were no breaks in the entire match of either player. Each had opportunities to break in he opener, but Isner played a couple loose points in the tiebreaker to fall 7-3.

Not only did Isner make a couple of unforced errors, he appeared to be bothered by the heat.

“In the first set, my legs weren’t underneath me,” said the University of Georgia graduate. “When the sun was out, I was struggling. It was really hot out there.”
Once the second set began, Isner first serves that were hovering around 129 mph dropped to around 115 mph. Kyrgios on the other hand handled the heat with what seemed like great ease. Minus a few avoidable unforced errors, his play or his attitude didn’t look to be affected by the scorching temperatures or the impending rain. The players would continue holding serve and force a second tiebreak. Kyrgios would jump up to a 3-0 lead in the breaker, Isner fought back and served to try to get back in the breaker, but double-faulted on match point to take the match and the 2016 BB&T Atlanta Open Championship.

“All I was thinking about, is the odds are in his favor to win a tiebreaker,” admitted Kyrgios. “I was taking it point-by-point. It came down to a couple points.”

This marks the second ATP tour title for Kyrgios and adds to his confidence heading into the U.S. Open.

Molteni and Zaballos dropped a break early, but rebounded to get back on serve. They prevailed after a first set tiebreaker win 7-6(2). They took advantage of a service break late in the second set, to win at 6-4. Molteni ended the match by hitting a celebratory ball into the air, almost as high as the nearby BB&T office building, as the win gave Molteni/Zaballos their first ATP doubles title as a team. 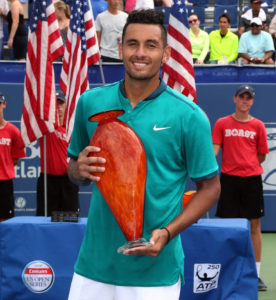 Lance Moore Retires After One Practice with Atlanta Falcons