Four tennis players with local ties will try and earn a coveted spot in the men’s singles qualifying draw of the 2016 BB&T Atlanta Open, as part of the BB&T Atlanta Open Wildcard Challenge. The matches are set for Tuesday, July 26, and Wednesday, July 27, one the new practice courts at Atlantic Station.

Experience two days of high-level tennis and intense competition for free between four talented athletes July 26-27. Zachary Dunkle, who just recently battled his way to the US Open Sectional Qualifier’s Semi-Finals, will compete against  Galen Lee who is currently ranked top 100 in the nation (B18) &  top 15 in the southeast region. On the other half of the draw we have Georgia Tech Yellow jackets Christoper Eubanks and Cole Fiegel going head to head. Eubanks went 37-4 during his 2016 season which earned him a spot as a 2016 All-American, by the Intercollegiate Tennis Association, while Fiegel captured the 2015 men’s title at the ITA Summer Circuit. Watch these talented players fight for a spot in the highly anticipated annual Qualifying Draw of the BB&T Atlanta Open!

Park in the Atlantic Station parking deck and to park close to stairwell #15 or 16. The Final 4 matches will take place on our practice courts located between these two stairwells.  FREE parking in the deck for 2 hours, nominal charge if you stay longer than 2 hours. 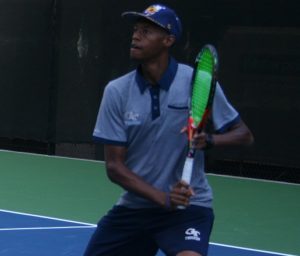