BIG3 and Monster Energy have announced the first celebrity participants in the Monster Energy BIG3 Celebrity Game. As part of the BIG3’s Championship Game-day events, the league will welcome the biggest stars in sports and entertainment to participate in the game raising money and awareness for underprivileged youth. The Celebrity Game will tip off at 2 pm ET at State Farm Arena in Atlanta, GA, on Sunday, August 21st, followed by the league’s inaugural All-Star Game and 2022 Championship Game – the BIG3’s biggest weekend yet. The Celebrity Game will air on Sunday, September 4, 2022 on CBS.

This will be a big day of hoops.

The Celebrity Game will feature two teams of celebrities going head-to-head in a game of FIREBALL3 – the BIG3’s innovative 3-on-3 game played on a half court with single free throws, a four-point circle, and even the “Bring the Fire” rule allowing teams one challenge per half determined by an in-game one-on-one.

Gronkowski is putting all his energy into this game.

“I can’t wait to get back on the bball court for the Monster Energy BIG3 Celebrity Game.”

“Bringing together the hottest celebrities and biggest names in basketball has been part of the league since its inception, so having a celebrity game was just a matter of time as our league grows,” said Ice Cube, BIG3 co-founder. “Monster Energy has been a great partner of the BIG3 and we are excited to be working with them to raise money and awareness for important causes and bring the BIG3 its first-ever Celebrity Game. These celebrities have talent for sure, but whether you’ve won a Super Bowl or a Grammy, it still comes down to what you do out there on the court.”

This day of fun is about giving back and the fans!

Presented by Monster Energy and produced by Idol Roc and Celebrity Sports Entertainment, this special event is designed to raise money and awareness in support of underprivileged youth. Monster Energy will donate a minimum of $25,000 to the event’s charitable beneficiaries, in addition to complimentary tickets and experiences.

“At Monster Energy we feel that we have a responsibility to support our local communities, and we are thrilled to be partnering with Ice Cube and the BIG3 for this event,” said Dan McHugh, Monster Energy CMO. “With Monster Energy athletes like Rob Gronkowski competing for their favorite charity this is sure to be a great time for an even greater cause.”

BIG3 is about action and fans can be a part of it. 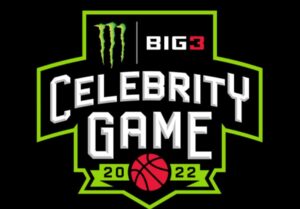