Kevin Harvick Beats the Rain for Big Weekend in Atlanta

Kevin Harvick held three fingers out his window on his way to Victory Lane after Sunday’s Folds of Honor QuikTrip 500 at Atlanta Motor Speedway.

The salute to Dale Earnhardt Sr. replicated the one he made 17 years ago after his first win as a NASCAR Cup Series driver.

It was also the last time Harvick won at AMS, despite leading more laps at the 1.54-mile oval than anyone else.

“That was the first win of my career and to be able to do that, to pay tribute to Dale was pretty cool,” Harvick said. “I’ve been waiting a long time to do it. We’ve had so many days where we could do that here. For five years, it’s been so fast at this particular race track — and a lot of other ones — but I love racing here and it’s good to be back in Victory Lane. Finally.”

Harvick has led more laps than any other driver at Atlanta, his 173 on Sunday upping the total to 1,152.

Getting another win had eluded the No. 4 car, though.

He led 292 of 325 laps at last year’s Folds of Honor QuikTrip 500, but a pit road speeding penalty with just 13 laps to go allowed Brad Keselowski to jump ahead for the win.

On Sunday, Harvick overcame a pit problem at the start of Stage 2 and, after battling with Keselowski late, pulled away for a definitive victory.

“It was great getting into this race car and knowing everybody knew they had to beat our car,” said Harvick, who also won the Xfinity Series race on Saturday. “We overcame a lot of things today and got a late-race restart that we drove off and won the race with.

“There were so many demons that seemed to haunt us here for a long time, but the coolest part was being able to replicate that first win celebration.”

Harvick won Stage 1 and then his pit crew had trouble with the air gun. Harvick’s team wasn’t the only one to struggle with the new NASCAR-supplied tool, but he had to come back around for another stop to tighten the lugs. Harvick went from first to 19th.

He began working his way back to the top quickly. Just 28 laps into Stage 2, Harvick had climbed all the way back to seventh. Ten laps later, he was third and five laps after that, Harvick was back out front.

Keselowski claimed the Stage 2 win and the top cars, including Kurt Busch and Denny Hamlin, continued to jockey for the lead for the next 100 laps.

Hamlin took a chance, delaying one of the last pit stops, but it wasn’t enough to hold off Harvick.

“I felt like our long-run speed was so good we needed to stay out there, have fewer stops and spend more time on the race track,” Hamlin said. “Either way, we kind of ended up where we should have.”

Keselowski was second and Clint Bowyer was third.

“We had a really strong day on pit road,” Keselowski said. “With how many pit stops you have here at Atlanta, that can be critical to a team’s success.

“But Kevin, man, he was just in a league of his own. We threw everything we could at them, we just didn’t have enough.”

Martin Truex Jr., who started at the back of the field following a failed pre-qualifying inspection, was fifth. Joey Logano was sixth, followed by the Busch brothers. Pole-sitter Kyle Busch was seventh and Kurt Busch was eighth. Kyle Larson finished ninth, and Dawsonville’s Chase Elliott finished 10th after starting 27th. Only 13 cars finished on the lead lap.

Harvick walks away from Atlanta with his 38th career NASCAR Cup Series victory and heads to Las Vegas qualified for the 2018 NASCAR Playoffs.

Harvick was also victorious on Saturday.

He surged to the front on a one-lap shootout to end Stage 1 and rolled to a dominating win in Saturday’s Rinnai 250 at Atlanta Motor Speedway.

Harvick has won the Xfinity Series race at AMS four of the last six years and five times overall.

In the truck race, Brett Moffitt slid down to the bottom groove, surged to the lead in overtime and won the Active Pest Control 200 benefiting Children’s Healthcare of Atlanta Saturday night at Atlanta Motor Speedway.

Moffitt got a chance to claim just his second Camping World Truck Series win after pole-sitter Kyle Busch had a pit miscommunication under caution late.

The field pitted with six laps to go, and Busch, who led 67 laps, left his pit box before the lugs on his left rear tire were secure. Busch made it off pit road and the tire fell off. He reverse to get it fixed, but a win was no longer in the cards.

NASCAR racing returns to Atlanta in 2019, and fans can become AMS Insiders Club members by renewing their tickets on or before June 8. The AMS Insiders Club offers access to more than 750 exclusive race-weekend experiences, no-interest payment plans, a limited-edition commemorative race ticket, and more. 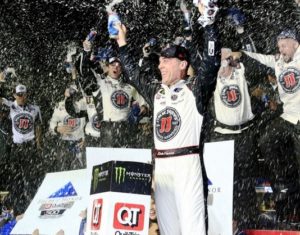