Among the most notable new designs is the Braves’ cap, which includes the screaming indian logo that has not been a part of the Braves’ uniform since 1989. The new cap features the yelling brave in red stitching on a blue rimmed hat.

In 2012, the Braves introduced an “alternate home” uniform that was similar to what the team wore when the franchise moved from Milwaukee to Atlanta in 1966. The cream-colored threads did not feature a tomahawk nor the screaming indian. The left sleeve of the new jersey has a crossed tomahawk instead of the screaming indian logo that appeared on the 1966 jerseys.

What are your feelings? Will you be buying the new hat, or do you object? 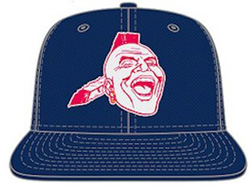