Atlanta Hawk, Kent Bazemore, dishes out assists on the basketball court, but he and an his foundation dished out a big assist to Atlanta’s Hutchison Elementary School this week.

Volunteers brought out items for the school’s STEM (Science, Technology, Engineering, Math) lab, including a robotics table; attendees will also plant vegetation for a greenhouse, refurbish a fish pond and plant flowers. Bazemore talked about his basketball, but also the importance of education.

ARMS Foundation events are often times open to the public.

Comcast Corporation leads the way as a global media and technology company with two primary businesses, Comcast Cable and NBCUniversal. Comcast Cable is one of the nation’s largest video, high-speed internet, and phone providers to residential customers under the XFINITY brand, and also provides these services to businesses. It also provides wireless and security and automation services to residential customers under the XFINITY brand. NBCUniversal operates news, entertainment and sports cable networks, the NBC and Telemundo broadcast networks, television production operations, television station groups, Universal Pictures and Universal Parks and Resorts. Visit www.comcastcorporation.com to see how they also give back to the communities they serve. 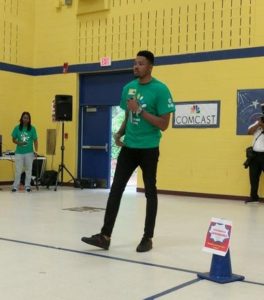