HARD TO KILL pay-per-view event airs LIVE around the world from Atlanta on Friday Night, January 13

HARD TO KILL is one of IMPACT’s premier events of the year, every year – and the 2023 show is a blockbuster, on Friday, January 13. Then, on Saturday night, January 14, IMPACT Wrestling presents the Hard To Kill Fallout Show, also at Center Stage, as the company’s television team will capture all of the in-ring action for upcoming episodes of IMPACT’s flagship weekly TV show, #IMPACTonAXSTV (Thursday, 8 p.m. EST on AXS TV in the U.S., Fight Network in Canada and Impact Insiders on YouTube.)

The double main events at HARD TO KILL are both title bouts. IMPACT World Champion Josh Alexander puts his championship on the line against one of pro wrestling’s most hated fighters: Bully Ray, a member of both the IMPACT Wrestling Hall of Fame and the WWE Hall of Fame. Plus, Knockouts World Champion Jordynne Grace defends her title against legendary star Mickie James, who has promised to retire from wrestling if she does not defeat Jordynne.

All the IMPACT stars will be in Atlanta for the January 13-14 shows, including Eddie Edwards, Brian Myers, Matt Cardona, Chris Sabin, Alex Shelley, Moose, Taya Valkyrie and Deonna Purrazzo, among others.

IMPACT Wrestling has a rich history in Atlanta, including the AGAINST ALL ODDS showcase event in July 2022. Atlanta also served as the home for IMPACT’s 2007 Bound For Glory premiere event, headlined by Sting vs. Kurt Angle.

“I’m excited about the weekend ahead,” said James in an exclusive interview. “There (are) still some seats available for Saturday. I have lots of Atlanta memories. I was there for the Super Bowl, and love coming to Atlanta.  It will career vs. title in Atlanta . I’ve wrestled in Atlanta a lot. Never have the stakes been so high. It’s a lot of pressure.”

Tickets for the IMPACT shows in Atlanta: https://www.ticketmaster.com/event/0E005D4DB57134B8.

And you’ll be able to see it all on the upcoming pay-per-view. 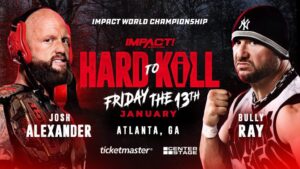 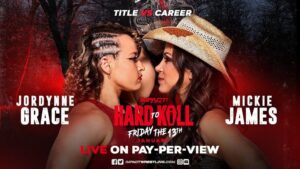