There will be snow at SunTrust Park this December as the Atlanta Braves and U.S. Ski & Snowboard are teaming-up to host Visa Big Air Presented by Land Rover at SunTrust Park on Friday, December 20 and Saturday, December 21. Visa Big Air, which will be a sanctioned FIS Snowboard and Freeski World Cup, will be the first event of its kind to come to Atlanta. This two-day event highlights Olympic winter competitions, featuring elite international men’s and women’s big air athletes.

Imagine a 15-story steel scaffold jump structure that will be installed at SunTrust Park. 800 tons of snow will also be brought in to create a surface on which the world’s best freeskiers and snowboarders can perform. Athletes will drop into an approximately 40-degree in-run, then launch themselves off the jump at speeds up to 40 miles per hour to perform their biggest tricks while traveling up to 70 feet in the air.

This is not only a treat for Braves and Atlanta sports fans, but for U.S. Ski and Snowboard.

“The Visa Big Air at SunTrust Park will bring our sports out of the mountains and to the people in a major metropolitan area,” said U.S. Ski & Snowboard President and CEO Tiger Shaw. “We are very excited to have Visa as our title sponsor and to partner with the Atlanta Braves to continue to grow the fan-base of this exciting sport for our athletes, sponsors and the snow sports industry ahead of the 2022 Games in Beijing.”

Secure your tickets now for Visa Big Air at SunTrust Park! A discounted 2-day pass is also available, so you don’t miss any of the action this December.

Visa cardholders are eligible to receive discounted rates up to 20% off on 1-day tickets. Enter promotional code VISABIGAIR at checkout to receive the exclusive, limited-time offer. Valid while supplies last or until Friday, September 27.

Tickets will go on sale to the public on Friday, September 6 at 12 p.m. 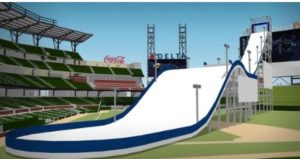 Go Online to Register to Run for GA Senate Seat