Today on The Players’ Tribune, Atlanta Falcons’ QB Matt Ryan opens up about the team’s heartbreaking defeat in the Super Bowl. In his piece, Ryan reveals how he was able to accept the defeat, move on and regroup with his teammates in order to make another run at a championship.


On accepting defeat:
“After the Super Bowl, everybody on the team basically went their separate ways for a few weeks — on vacation, to visit family, or just home to disappear for a little while until off-season workouts. I don’t know about any of the other guys, but for me it was sort of cathartic to go back and watch the Super Bowl film — which I did a few times. And watching it definitely brought an element of finality … almost a realization, like, Man, that really happened.

So yeah, it wasn’t instantaneous. Even after the game, it had taken some time for the loss to really set in — for me to fully grasp what had happened. And there was definitely a bit of a mourning period, too. I was in a funk for a while. When somebody would talk to me about the Super Bowl — it could have been anybody … family, fans, the media —  it would stay with me the rest of the day. It didn’t matter what I was doing. I could be out grocery shopping and it would creep back into my mind.

I’d be standing in the produce aisle, in a daze, thinking, How did we lose that game?

That thought just kept coming back.

But then, maybe three weeks or so into the off-season, like around the end of February, Dan Quinn sent a couple of emails out to the entire team. Most of what he said, we want to keep in house, you know … but I can sum them up for you.

Basically, the gist was: What’s done is done. 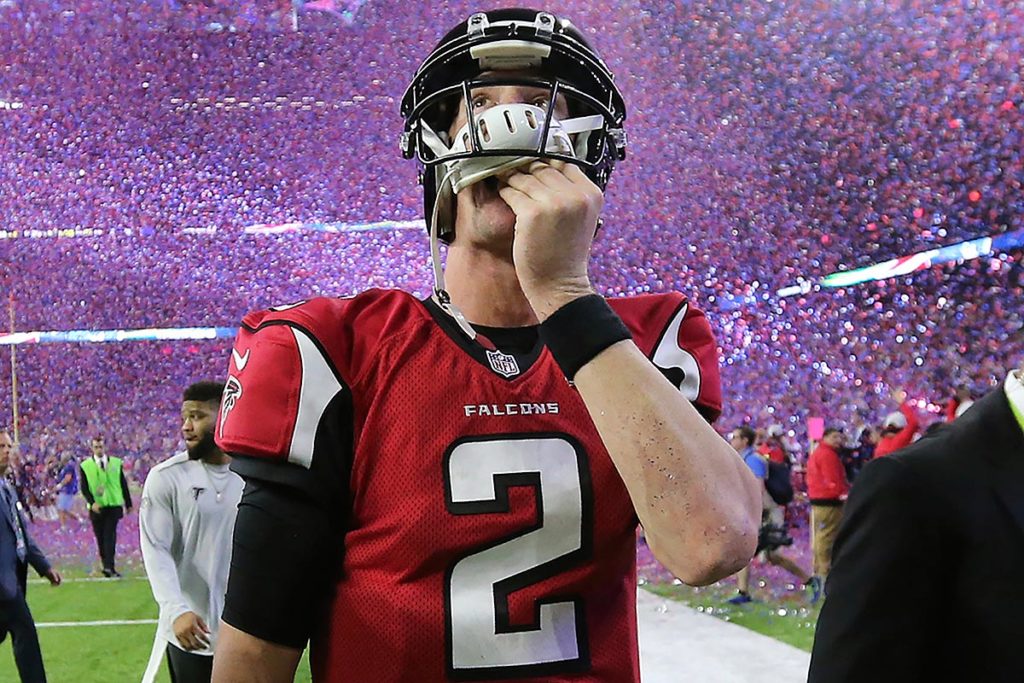 He told us that we would be a better, stronger and tighter-knit team because of the loss. But it wasn’t gonna happen on its own. He said he needed us to work on getting ourselves right individually during the break so that when we got back together our focus would be on 2017 and making sure that we were collectively where we needed to be. When we come back, he said, our eyes need to be 100% in front of us.

It was a pretty simple, honest message, and I really took it to heart. Because I felt like Dan was challenging me. Like he was challenging all of us. And as a leader on this team, I instantly felt a huge responsibility to put the Super Bowl behind me and focus on the future.

I think that’s when my mood started to change — when I got those emails.

And I wondered if the rest of the guys would respond the same way.”


On regrouping with his teammates:

“The first time we got back together as a team after the Super Bowl was in April, a few days before we started our off-season program. I invited the whole team down to Miami for a few days to not only work out, but also to just spend some time with each other. I thought it was important for us to regroup — just us players — and really talk through anything that needed to be talked through … and also to start working on the field together to try to create a good culture moving forward.

I have to admit, I didn’t know what to expect down there. I felt like I was in a good spot, personally, but I could understand if other guys felt differently. I figured some of them were probably doing alright, but I also thought that some guys might still be hurting a little.

And I was floored by what I saw over the course of those three days in Miami.

First of all, we had somewhere around 45 guys come down. That’s more than twice as many than had come the year before. And everybody was in much better shape than I had expected. I don’t know if they had been working out to blow off steam from the loss or what, but guys came down there in shape and ready to go to work. In April. That was a really encouraging sign.

Hands down the best feeling was getting back on the field. I think that’s when it fully turned for me — when I could finally leave 2016 in the past and put all my focus on how to become a better player moving forward and help us get back to the Super Bowl … and this time, finish the job.

First off, when we started throwing the ball around I think we realized pretty quickly that, Hey, we’re still pretty damn good at this. After weeks and weeks of hearing people talk about how we had lost, how we were this or that — all these negative things — I think it was important for us to just get back to playing football. Because regardless of what anybody else says or thinks, the fact is, we’re coming back with pretty much the same team we had last year, and we’re still pretty good.

And the time we spent together in Miami off the field was just as vital. After working out during the day, some of the guys would go out to dinner or just hang out together in the evenings. That was when we really checked up on each other and got a feel for where everybody’s head was at. The guys who were still hurting a little and needed to talk about the Super Bowl talked about it, and the guys who didn’t — they just listened. And it was just a really cool thing to see how the guys connected and supported each other and kind of fed off one another. It was special to watch.

Overall, I was mostly just surprised at how positive and upbeat everybody was and how excited they were to get back together and get back to work — to rekindle that fire we had started, and to improve upon the culture we had been building the last couple of years.”


On learning from other champions:

“I have to admit. Every now and then, when we’re practicing at our indoor facility, where all the banners are hanging, sometimes I look up and see the 2016 NFC championship banner, and I think about the Super Bowl.

But then I move on to the next play or the next drill and the thought leaves me. I don’t dwell on it like I did those first few weeks after the game. It doesn’t follow me to the grocery store.

I think that’s when you know you’ve moved on — when you can naturally just … let it go.

All the people out there in the media and whatever are talking about how competitive our division is going to be, and how our schedule will be tougher this year, and how it was just one good run … that we’re not proven yet. And they say that teams that lose the Super Bowl usually don’t even make the playoffs the next year — ‘hangover’ is the word people like to use.

You could throw around statistics or history or whatever you want. But the reality is that a team can come back from a bad loss in a championship game. It’s been done before. And I believe that we have the right group here in Atlanta to do it, too. I actually think we have what it takes to win here for a long time. But we can’t win playoff games in September. We can’t win a Super Bowl in Week 1. We’re living in the here and now. And right here, right now, I’m proud to be a part of this football team, with this group of guys, led by this coaching staff, and playing in front of these fans. Because I know we can compete with anybody.

So yes, we lost. We could have been champions. But we’re not.

I can’t predict that we’re going to make the playoffs, or win the division, or get back to the Super Bowl, or win a championship. I just can’t. Those are all goals of ours, but I know how difficult it is to win in this league.

Last year, we got one step away from our ultimate goal of winning a Super Bowl. And we’re ready to take the next step, starting now.

Because the only fight that matters is the one you’re in.”

Best Hikes in and Around Georgia