Atlanta has been selected to host the Super Bowl for the first time since 2000.

After a NFL owner’s meeting in Charlotte on May 24th, in which several cities pitched their cases for hosting one of the next three Super Bowls, it was announced that Mercedes Benz Stadium will be home to the fifty third Super Bowl in 2019.

The pitch was called “Atlanta Transformed,” and it hoped to highlight changes that the city has made since it last hosted the Super Bowl in 2000. At the forefront of these changes is Mercedes Benz Stadium.

The new stadium, which will have been in use for three seasons at the time of the game, has 19 more suites, 20 more bars and thousands more club seats than the Georgia Dome. These new features will be great for the fans who care less about the actual game and more about the entertainment aspect.

The presenters also highlighted other attractions that are downtown for guests to enjoy while they’re in town such as the World of Coca-Cola and the Georgia Aquarium.

They also pitched the fact that travel/accommodations for the game would not be a problem with the thousands of hotel rooms downtown and one of the world’s largest airports only minutes from Atlanta.

The weather was also a selling point during the presentation because winter storms, that could make traffic a nightmare, are not common in Atlanta.

Corso and Blank also talked about how attractions around Mercedes Benz Stadium are fairly close together and guests will be able to walk from one location to the other, which will eliminate a lot of issues with traffic.

Before the presentation Atlanta Mayor Kasim Reed was hopeful the city would land the big game because Gov. Nathan Deal signed legislation that gave tax exemptions on ticket sales in April, which served as more incentive for the NFL to bring a Super Bowl to Atlanta.

“We have done our part,” Reed said. “I feel real good about our prospects.”

City officials hope that having the Super Bowl in Atlanta will bring in a large amount of revenue, but it will be hard to determine if it will or not. J.C. Bradbury teaches sports management and economics at Kennesaw State University and he said that economic predictions are often overshot and that it is almost impossible to determine if the revenue brought in is because of the Super Bowl.

“A lot of times what you’re doing is displacing people who would have been there anyway,” said Bradbury.

However, regardless of revenue, citizens of Atlanta are excited to host a Super Bowl for the first time in what will be 19 years.

Atlanta, which will also host the Final Four in 2020, outbid Miami, Tampa and New Orleans for the right to host the game. 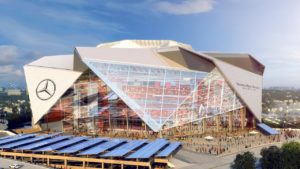 Play Ball: Minor League Baseball on the Gulf Coast is a Home Run