College basketball has entered their “conference seasons” and there is unprecedented success taking place in Kennesaw.

For the Kennesaw State men, the Owls used an impressive defensive performance and 41 combined points from two hot players in Demond Robinson and Chris Youngblood last Saturday to snap Queens’ 17-game home win streak with an 76-67 victory in ASUN men’s basketball action from Curry Arena. The Owls, who’s only conference loss is off a last-second three-pointer, moved to 3-1 in ASUN action, 11-6 overall with their fourth road victory of the season. Queens meanwhile dropped to 12-5, 2-2 in the conference.

The ASUN is turning into a Mid Major surprise.

“Really proud of our guys tonight, more about their resolve and their response after a tough loss at North Florida on Thursday night. For us to bounce back like that against a really good Queens team at their place and come out of there with a win. Can’t be more proud of these guys to hold a team that has the offensive firepower they do to 37% shooting, 33% on threes, and only 67 overall points. Our identity on the defensive side really showed tonight. Demond Robinson was amazing, getting 19 points and eight rebounds, the way he competed and established himself tonight was big for us,” said Kennesaw State Men’s Head Coach, Amir Abdur-Rahim.

The men have a two-game homestand this week, starting with a Black Out on Thursday night against Jacksonville at 7 p.m. in the Convocation Center. All fans are encouraged to wear black to the game while the first 1,000 fans will receive a free KSU Black T-shirt.

The women are having success of their own. They currently sit 2-1 in ASUN play.

The Lady Owls defeated Bellarmine 64-56, Saturday afternoon at Freedom Hall in Louisville to earn to that winning record in ASUN Conference action for the first time since 2015-16. The Owls nearly led from start to finish as they took control early and didn’t look back. KSU’s defense was key in the win, forcing 20 takeaways and outscoring Bellarmine 19-0 in points off turnovers. Four Owls finished in double-digits, led by Kennesaw State’s DI new all-time leading scorer Amani Johnson’s 13 points. There was big help from Stacie Jones and Lyndsey Whilby, who each added 12 and Gabi Legister scored a season-best 10 in the win.

“We’ll we have been playing some challenging games in our non-conference. I said very early on that hopefully we were learning lessons from all those tough losses and those tough opponents. Playing three Power-5 opponents almost back-to-back-to-back and playing a very good non-conference opponents, I was hoping we would grow up and it seems like we are.”

They will be back at home next week with Thursday/Saturday home games including a “Blue Out.”

Ticket prices are affordable and the entire family will love the halftime entertainment.

It’s family friendly fun in Cobb County with some great basketball thrown in for good measure. 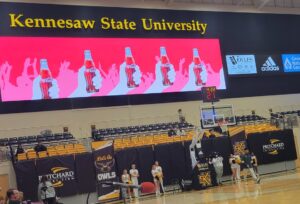 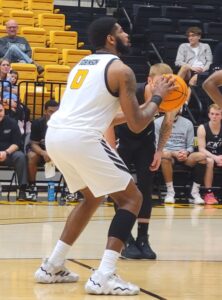 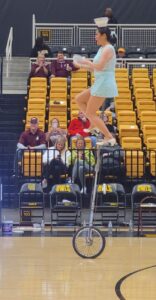 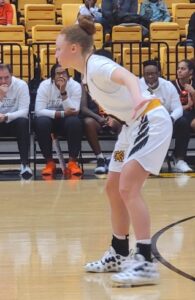 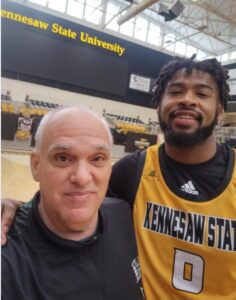