If you grew up in the 90’s, Pokémon probably had a very special spot in your heart. When Pokémon Red & Blue Versions hit US shelfs on September 20th, 1998, the series blew up into a gaming icon. There have been multiple games that have been released for Nintendo handhelds since then, including 2 new games coming out later this year. That being said, the Pokémon game that is all the rage right now is an iOS and Android app breakout hit, Pokémon GO.

Most of who are reading this article are probably multitasking the game right now, but for those of you who don’t know, Pokémon Go is an app/game where you use your phone’s camera and wifi to catch Pokémon out in the real wild. Depending on how much you’ve walked and your location around in-game lures and pokéstops,  you can encounter a variety of the classic 151 beasts and “catch ’em all!”

Due to the game’s rapid popularity boost, some businesses are planing to incorporate the game’s playability to attract players to their place of business. One such example is a coffee shop in Atlanta known as Huge 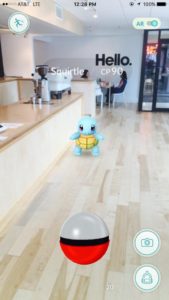 What makes Mr. Derek Fridman, the owner of Huge Café, in such a good position is that the business sits in-between two Pokéstops. He’s also upped the ante by purchasing and placing lures so that better Pokémon will show up.

It seems to have paid off as business has seemingly increased exponentially due to the mass gathering of consumers who are hoping to snag some uncommon Pokemon that may pop up due to the lures and the high volume of players in one spot.

He recently told adage.com the he witnessed a business posting on their bathroom doors, “Restrooms and Pokémon are for paying customers only.” He felt that he should take the stance of embracing the hit phenomena instead of shutting it away. It would seem the reception is warm and it’s a business model that will likely be duplicated all around the metro area.

Kids in Georgia has Access to 8,000 Books This Summer

Savannah Police Stun the Wrong Man and Arrest Him for Obstruction