A former Atlanta police officer was sentenced to 20 years with five to serve in prison after he pleaded guilty to repeatedly kicking an unarmed teenager and choking him until he was unconscious during an arrest three years ago. 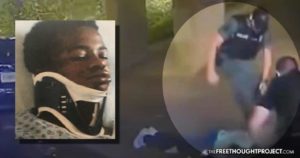 On Sept. 15, 2016, Atlanta police chased a stolen BMW south on I-75. The pursuit ended on Lawton Street in southwest Atlanta when a Georgia State Patrol trooper struck the vehicle from behind, causing it to spin out.

A 15-year-old passenger identified as Antraveious Payne got out of the car and laid on the ground with his hands up, showing he did not have a weapon and was willing to surrender, prosecutors said.

Johns, who had been with the department for nine years, ran toward Payne and kicked him in the head three times before pressing his knee into the teen’s neck, rendering him unconscious, authorities said.

Payne suffered a number of cuts and bruises, a neck strain and a serious concussion during the arrest, prosecutors said. The incident was captured on officers’ dashboard cameras.

Johns told investigators he thought Payne was reaching for a gun, but the other officers on the scene said the three suspects never resisted, Channel 2 Action News reported.

The teen suffered a concussion after being assaulted by a former Atlanta police officer in 2016.

Johns was placed on administrative leave and then fired by Atlanta police Chief Erika Shields the following July after she took over the department.

Once Johns’ fellow officers viewed the tape, they said he acted inappropriately and agreed to testify against him, Fulton County District Attorney Paul Howard said in a statement. Johns was indicted on criminal charges last October.

Read the rest on AJC.com