The Atlanta Falcons have their final 53 man roster ready for next week’s opener against Tampa Bay. Last Thursday, after Atlanta beat Jacksonville in its last preseason game, Falcons head coach Dan Quinn said that his players have played hard during the preseason.

Nick Williams, who was battling for a roster spot at wide receiver, made the team, and Quinn said that Williams has a lot of strength and tenacity.

“Well, I think the first thing about Nick that we talk about is his toughness,” Quinn said. “It just jumps out. He’s a rare competitor and it shows up in practice and the game.”

Williams, who caught 17 passes for 159 yards and two touchdowns last year, will probably have a larger role in the passing game this year with the departure of Roddy White. Quinn also talked about Williams’ versatility after the win.

“We could put him in a number of different spots,” Quinn said. “He also has versatility as a kickoff returner and punt returner. He’s that person that you can always count on.”

Quinn also talked about veteran safety Dashon Goldson, who was recently signed by Atlanta. Quinn said that his physicality will be big for the Falcons this year.

“We know he’s a competitor,” Quinn said. “Now the communication and getting on the same page over the last three days, which was an important step for him, to get into and learn the system. He’s still got work to do in terms of learning the system, but we were pleased with the physicality.”

The veteran safety will help the Falcons add some depth at the beginning of the year with promising first round draft pick Keanu Neal out with a knee injury. Goldson, who has been in the NFL for nine years, spent last year with Washington where he had 110 tackles, two interceptions and a forced fumble. 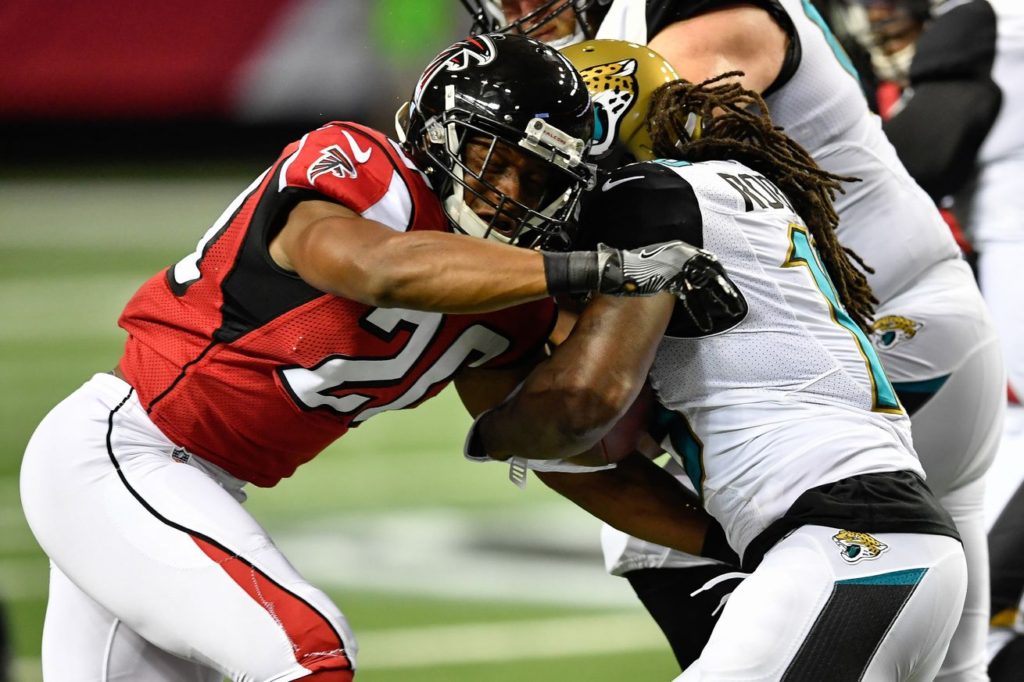 Quinn also spoke on recent acquisition Courtney Upshaw. Upshaw spent the first four years as a linebacker with Baltimore before coming to Atlanta. Quinn said that Upshaw’s size, along with his speed, will help Atlanta’s defense.

“He really showed up over the past two games when we went back and looked at it,” Quinn said. “His ability to penetrate and cause somethings on the move. He’s a big guy. He’s almost 300 pounds and can move.”

Upshaw will be trying to help the Falcons’ defense get better in close games. The defense last year was ranked in the middle of the league in total yards allowed, which caused them to lose close a lot.

Terron Ward made the team as the third running back. Ward played sparingly last year in his rookie season. Quinn said that Ward showed a lot of toughness in the preseason finale.

“He has a warriors mindset and he always have,” Quinn said. “He was sore coming off the ankle injury. He expected to have a big load and he did. He definitely delivered. We were real proud of Terron and his effort tonight.”

Now that the roster is set, Atlanta can start getting ready for Tampa during week one. Seven of the Falcons eight losses last year were nail biters, and they will need to force some more turnovers and have some big plays on defense if they want to break last year’s mediocrity spell.

As for the offense, Atlanta must become more balanced. While they were in many close games that called for big plays, the Falcons threw the ball about 200 more times than they ran it, yet Devonte Freeman still was ranked seventh overall in rushing yards.

The Falcons must also cut down on penalties. They were ranked eleventh in penalty yardage.

Now that Atlanta has been through a season and another summer with Dan Quinn and offensive coordinator Kyle Shanahan, the Falcons should be able to get over the hump and win some of the close games that haunted them last year.

The Falcons first take the field on Sunday, Sept. 11, in Atlanta against the Buccaneers.