The National Ninja League (NNL) World Championship came to a close this past weekend, at Ninja Quest Fitness in Marietta, GA. It was an astounding competition as ninjas not only from the across United States, but also internationally came to compete over a two-day span for the top spots. The title for number one in the ranks for the third season of the NNL World Championships was awarded to Drew Drechsel in the Men’s Division and Olivia Vivian in the Women’s Division. A few well-known faces in the ninja community and from the NBC show, American Ninja Warrior, such as Jake Murray, Grant McCartney, Brett Sims and more had been part of the competition.

In the 250 competitors a group from of Georgia natives from USA Network’s upcoming American Ninja Warrior: Ninja vs. Ninja show, the Young Bloods, competed. The team is comprised of Tyler Gillett (Newnan, GA), Bree Widener (Augusta, GA) and Kevin Carbone (Alpharetta, GA). The three may all live in Georgia but at times have to make quite the trek to meetup with one another in order to train.

“For us, there is a lot of back and forth text messages. It doesn’t always work out but when we’re all together it really helps us find out how everyone works,” states Bree Widener, member of Team Young Bloods, on the matter of team training when dealing with distance.

The community for Ninjas has grown all across the nation, we are even seeing a group arise within the Atlanta-area. “We have a name we call ourselves, the ATL Ninjas. Although most of us live far away from the gym, we still manage to train, run courses and train hard for the show,” states Kevin Carbone, member of the Young Bloods and creator of the Wingnuts (obstacle in American Ninja Warrior).

“I think we have the best ninja community across the country,” states Tyler Gillett. “I know I am a little bias, but we have strong ninja coming out of here.” He managed to move on to the make it past the first round of the competition and rank in the Top 15 on the Stage 2 Leaderboard.

The number one positions went to American Ninja Warrior, Drew Drechsel, and Australian Ninja Warrior, Olivia Vivian. Drew is a famous Ninja Warrior who has been wow-ing fans for years. Olivia is new to the US Ninja scene, but she’s quickly made a name for herself at competitions like this and the Wolfpack Ninja Tour.

The Ninjas faced a tough challenge at the NNL Finals. Only five athletes made it to Stage Three.

If you would like to view the scores and standing from the competition visit the World Championship Results page. The competition was also streamed this past weekend and can be found on the National Ninja League’s YouTube page. Keep an eye out for the Young Bloods representing the Georgia Ninja community in the upcoming weeks on American Ninja Warrior: Ninja vs Ninja.

Additionally, all those looking for recommendations on where to train if you’re looking to become a ninja warrior the Young Bloods may be able to point you in the right direction. “NINJA QUEST, Ninja Quest is the best”, exclaimed Bree. “I have one, it’s that they check out Ninja Quest Fitness, it’s the premier facility and its world class for training obstacles,” states Kevin. “Definitely Ninja Quest, I travel an hour through train here multiple days out of the week,” said Tyler. If you would like more information on location along with hours visit the Ninja Quest Fitness website. 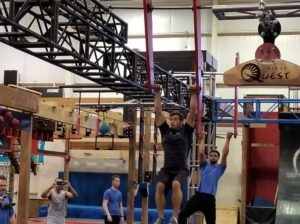 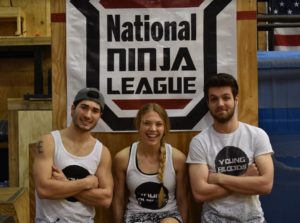