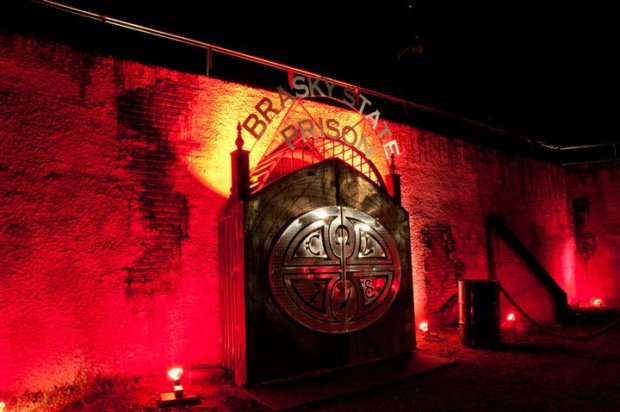 Events, Things To Do 1

Last night, I drove out to Douglasville to check out one of the Haunted Houses in the area that goes by the name of Nightmare’s Gate. As I drove on I-20, I could see the searchlights which I figure was the most popular attraction in Douglas County.

Just off of I-20 on Vansant Rd., you turn up on a sketchy small yard, which you will find Brasky State Prison. As you get out the car, your eyes are filled with sights of creatures walking around the prison. A pig-like creature carrying an oversized sledge hammer, ready to pounce on anyone. An inmate with one good eye walks around harassing anyone who stares at him. There is also a guard who stands with a pistol strapped onto him guarding the hearse, which is the entrance to Brasky State Prison. The mood was set right with the music from Five Finger Death Punch, Rob Zombie, Motionless in White, and AC/DC.

When it’s your turn for a tour of the Brasky State Prison, you are told to “move your ass” into the hearse. Every now and then, you might already get a fright from one of the creatures outside to hit the top of the hearse. Once you enter, you are greeted by a prison assistant to the Warden and are instructed to watch the video on safety rules.

This attraction definitely had me jumping out of my Air Max’s. There were a group of 6 of us that went into this haunted attraction. I usually don’t get scared often, but this attraction was one of my favorites.

From the start all the way to the finish, the actors there were on the top of their game using every scare tactic in the

books. All the actors, even the ones outside of the “prison”, were very engaging scaring everyone from each direction. As I walked through the haunted attraction, I did not know where to expect the next person. From the front, back, left, right, above and below each scare was something new. This was not some low-budget haunted house that was overpriced. Nightmare’s Gate was legit and looked real! Tight spaces, dark corner, a medical facility that looked anything but sterile, dirty walls and all. From the lighting, the characters, effects, and realness of the attraction, this is one of the best places in the Atlanta area.

Note: For those who are claustrophobic, this may be a tough one for you. There are some very tight spaces in the walkthrough that will make it tough for a person with that phobia. Make sure you talk to the ticket window. This attraction is not for young children. Thirteen should be the youngest to enter this attraction. The actors there are very vocal and use some adult language, but it’s all for good fun and to engage their guest. This attraction also tries to cater to wheelchair accessible as well. Just talk and accommodations will be made.