Tiger Woods has been served with a two-shot penalty for a violation that occurred on Friday’s 15th hole. He will tee off at 1:45 p.m. Saturday and is now five strokes behind leader Jason Day. 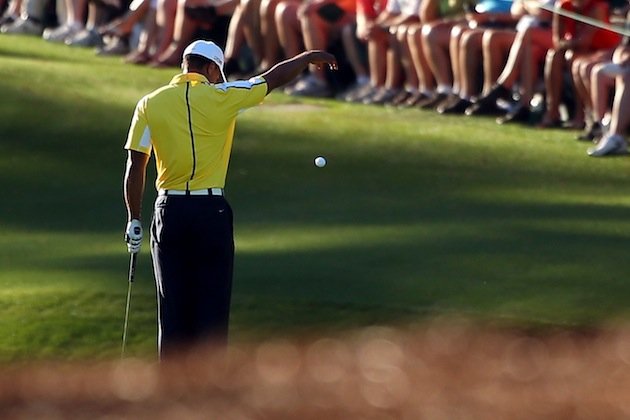 Woods faced disqualification stemming from a possible rules violation committed on Friday afternoon. After he struck one of the unluckiest shots in his Masters career, an approach on 15 that hit the flagstick and bounced back into the water, Woods dropped a new ball and began playing again. However, it’s how he dropped that new ball that’s at issue.

[Masters 2013 leaderboard: See how Tiger Woods and others are doing]

The rules of golf stipulate that a player may drop a ball in a designated drop zone, drop in the original spot from which the ball was hit, or drop in a spot that’s in a direct line from the flag to the place where the ball last hit the water. Woods appeared to combine options 2 and 3. (For a fuller explanation of the rules at issue, see here.)

However, there was enough wiggle room in the rules, particularly in regard to new so-called “HD television” rules, that Augusta National was able to give Woods a two-shot penalty but allow him to remain in the tournament. In short, players are allowed to avoid disqualification if they are unaware that they violated the rule but HDTV showed that a violation occurred – if, for instance, the wind moved the ball and the player didn’t notice.

[Related: Penalty against Tianlang Guan at Masters was uncalled for]

Does that rule apply here? Perhaps, perhaps not. Bottom line: Woods remains in the tournament, and everyone with an interest in the Masters understands the significance of that. There’s a case to be made that Woods should have been disqualified because of golf’s draconian rules. But the more reasonable punishment is this one, even if it doesn’t necessarily conform to the rules of golf as written.

Augusta National released a four-paragraph statement on the issue, which reads:

“Yesterday afternoon, the Rules Committee was made aware of a possible Rules violation that involved a drop by Tiger Woods on the 15th hole.

“In preparation for his fifth shot, the player dropped his ball in close proximity to where he had played his third shot in apparent conformance with Rule 26. After being prompted by a television viewer, the Rules Committee reviewed a video of the shot while he was playing the 18th hole. At that moment and based on that evidence, the Committee determined he had complied with the rules.

“After he signed his scorecard, and in a television interview subsequent to the round, the player stated that he played further from the point than where he had played his third shot. Such action would constitute playing from the wrong place.

“The subsequent information provided by the player’s interview after he had completed play warranted further review and discussion with him this morning. After meeting with the player, it was determined that he had violated Rule 26, and he was assessed a two stroke penalty. The penalty of disqualification was waived by the Committee under Rule 33 as the committee had previously reviewed the information and made its initial determination prior to the finish of the player’s round.”

One more element: Woods remains the favorite at Augusta, now tied with Jason Day at 5-1. The penalty only dropped him from 9-4 odds.

-Devil Ball Golf is at Augusta all weekend. Follow Jay Busbee and Shane Bacon on Twitter for the latest updates from the Masters.- 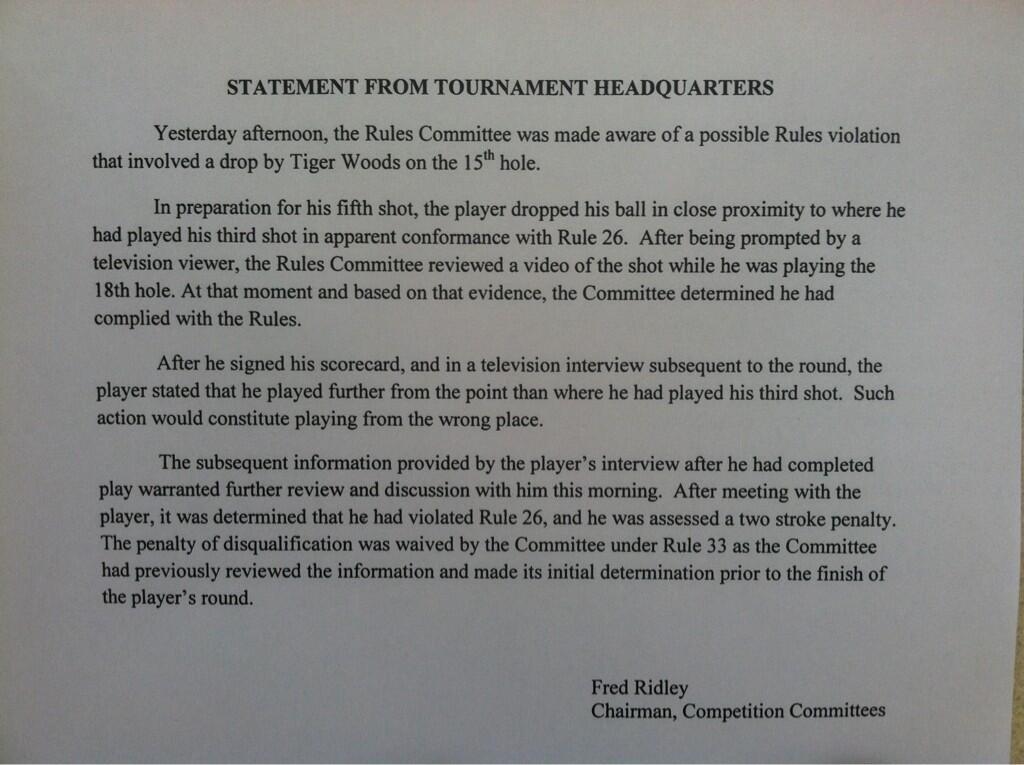 Orange Crush is Not Getting Better It's Getting Worse