See one of the legends of tennis this summer in Atlanta!

Venus Williams had so much fun in Atlanta in 2017, she couldn’t wait to get back. The wait is over for not only the WTA superstar, but for Atlanta tennis fans as Venus will once again play the Sunday evening women’s exhibition match to kickoff the 2019 BB&T Atlanta Open.

In 2017, she defeated Canadian star, Genie Bouchard, in straight sets, this time Venus’ opponent will be Madison Keys. With these two hard-hitting champions, the match will surely be a sellout, so get your tickets early.

“It’s now a BB&T Atlanta Open tradition to open our first night session with an exciting women’s exhibition,” explains BB&T Atlanta Open Tournament Director, Eddie Gonzalez. “After Sunday Night, the men take over for the rest of the week, but this gives us a chance to show off two great female champions and let a sellout crowd get a look at our new venue at Atlantic Station.”

Venus is a seven-time singles major champion and owns four Olympic Gold Medals. She’s off to a fast start in 2019, with quarterfinals results at Auckland and Indian Wells.

Keys is a 24 year old from Rock Island, Ill., that has reached a career high of No. 7 in the WTA rankings. She is the 2017 US Open singles finalist and is currently ranked in the top-20. She has finished the last four years ranked inside the top-20 and has played Fed Cup for the US and the Olympic Games in 2016.

“It will be an honor to play Venus on Stadium Court in Atlanta,” stated Keys. “Atlanta has always welcomed me during my tennis career and I’m excited to play this showcase event to kick off the 2019 BB&T Atlanta Open.”

“Our goal each year is to be a “Mini US Open” and we do that by showcasing these two women, who are inspirations both on and off the court,” added Gonzalez.

Visit www.bbtatlantaopen.com to get your tickets and the best seats. Don’t forget the awesome 25% off ALTA member discount for both sessions on Monday, July 22. Bring your entire ALTA team out in July! 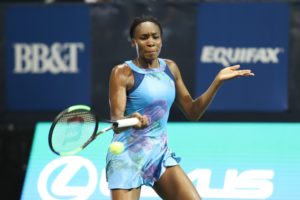 Atlanta Man Killed After Knocking on the Wrong Door