Wearing pink uniforms, Amani Johnson and the Kennesaw State women’s basketball team mounted a huge second-half comeback after being down by as much as 16 points in the first half. Kennesaw State honored returning head coach Agnus Berenato with a 63-57 win Saturday afternoon in the KSU Convocation Center. The team was wearing pink for this particular game to home breast cancer survivors and families and friends, along with those lost to the dreaded disease.

Head Coach Octavia Blue said it was about belief.

“I still believed in our ability to win the game. We were still getting a lot of shots that I think we could have made, a couple layups here and there. To go down by only 14 at the half, considering how poorly we played in the first quarter, I felt confident that we can come back.”

The Owls found themselves down but not out after the first quarter, after putting up the least amount of single-quarter points of the season with four in the first ten minutes; the team opened up one-of-12 from the field, with the other two points coming from free throws.

Despite being much improved in the second quarter, Kennesaw State still found themselves down by double digits at halftime to the tune of a 33-19 UNF advantage.

A season removed from being head coach of the Owls, former coach, Angnes Berenato was recognized from her seat for her achievements on and off the court as the KSU inspiration for Pink Day to much applause.

Jah’Che Whitfield set the tone early in the second half with a 3-pointer, cutting the team’s deficit to 11.

Sophomore Julia Rodriguez then hit her second trifecta of the season to bring the Owls within nine and it would be the final time Kennesaw State would be down by double digits in the matchup.

Johnson would set up an electric final quarter by laying up the last basket of the third quarter to slash the Ospreys’ lead to three. An amazing back-and-forth affair developed in the Convocation Center, with the scoreline tied up four times in the final 10 minutes.

It was the KSU captain that would make the difference once again, as Johnson put her point-guard counterpart in the spin cycle for nailing a three to tie the game at 51.

Johnson would come through again with a driving layup two minutes later, capturing the lead that would eventually win the Owls the game. 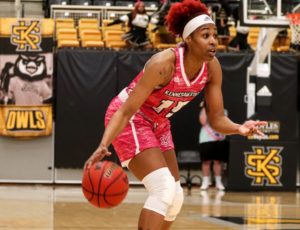 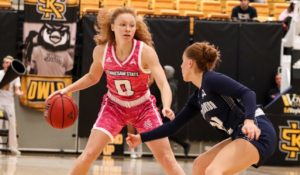