The Toyota Camry is the Call of Duty of cars. Rivals have been attempting to best it for years, hoping to encroach on its tremendous consumer base. Chevy’s hat in the ring, the Malibu, has enjoyed moderate success, having sold ~200k cars in 2015 to the Camry’s 430k. But in 2016, both cars experienced a heavy refresh, creating a less predictable contest for the crown. Here are five little things to love about the Malibu which could make it a Camry-killer.

The 2016 Malibu can be optioned with a 9-way Bose sound system which simply sounds incredible; highs and lows are crisp and the bass booms without a trace of distortion. It’s hands-down the best audio system I’ve heard in a car under $30k.

I fully expected the Malibu to have some turbo lag. It’s perfectly forgivable in non-luxury, non-performance cars. But it doesn’t. Chevy’s engineers have milled down the turbo lag so you get smooth power delivery when you put your foot down. Turbo lag this imperceptible would be impressive in a $100,000 car, let alone a bargain-priced commuter.

While Chevy MyLink draws ire from some automotive pundits, I find it to be quick, simple, and responsive; everything an infotainment system should be. Apps are displayed just like an iPad, making navigation a breeze. I also just love how it sits in the Malibu, proudly jutting out like a separate gadget instead of uncomfortably wedged into the center console.

4) A Strong Sense of Self-Awareness

Chevy offers a 250-horsepower Malibu, but don’t style it any differently than the base model (aside from 19″ wheels). It’s as if the makers of the Camaro and Corvette realize the Malibu isn’t for enthusiasts, so they don’t bother half-baking a “sport” version by slapping on silly body panels and hardening the suspension. 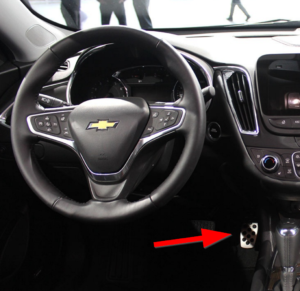 This little gem warmed my heart, because to most it will go unnoticed but Chevy did it anyways. The Malibu has a sporty metal gas pedal: a delightful slice of DNA from its much cooler older brothers, the Corvette and Camaro.

All-in-all, the Malibu falls a little short of perfection- large A-pillars hamper forward visibility and the base interior is a little plastic-y for my taste. But while the Camry will likely continue being the best-selling car, it may not be the best car in the segment anymore.

If you’d like to test drive the new 2016 Chevy Malibu (and hear it’s incredible sound system), see our friend Dino “The Weatherman” Hill at Jim Ellis Chevrolet. He can be reached at (478)256-8896 or dinoh@jimellis.com.