In the investigation, which involved a hidden basement, officials say they found cocaine, meth, and a huge stash of cash.


DEA agents told FOX 5 all of that cash was stuff into walls and suitcases. The drugs were found inside food packages. 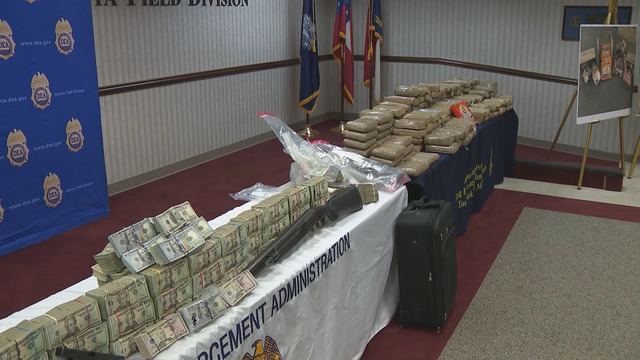 The combined total of drugs and cash in the raid totalled over $5 million. Agents say it all belonged to a Mexican drug cartel before the raids and series of traffic stops on Friday.

Agents say they seized about $850,000 in cash from a Lawrenceville home. They also seized more than a million dollars in heroin laced with fentanyl, $1 million-worth of meth, and over $3 million in cocaine.


They say it was a cooperative effort between multiple law enforcement agencies.

“The only way we’re going to be successful is through cooperation, and this is a shining example of what that cooperation leads to,” Murphy said.

Agents say in the Lawrenceville house the found a hidden basement room where a fake electrical box served as a doorway. Inside they say they found the cash and guns as some of the drugs.

The drugs were offloaded at a tire shop in the South Fulton area, Murphy said.

Georgia Officer Shot in Walmart Shootout Mouthed to his Wife: 'I Love You'