Paul Pierce’s game-tying three-pointer that wasn’t is now firmly in the past. So too is Al Horford’s offensive rebound and ensuing lay-up that stole Game 5 from the clutches of the Washington Wizards, as well as everything else that came to pass in the first two rounds of the NBA playoffs.

The highlights and lowlights don’t matter now. Only what lies ahead is important.

After all, the Atlanta Hawks are set to square off against LeBron James and the Cleveland Cavaliers after advancing to the Eastern Conference Finals for the first time in franchise history. Even with the four-time MVP a bit worn down, Kevin Love out for the year following Kelly Olynyk-induced shoulder surgery and Kyrie Irving dealing with some foot and knee trouble, the Cavs certainly make for an imposing foe.

Through the first few weeks of the postseason, Cleveland not only leads the field in offensive rating, scoring 110.9 points per 100 possessions, but it also boasts one of the five most suffocating defenses, per Basketball-Reference.com. That’s a brutal combination for Atlanta to deal with, regardless of whether the Big Three is fully healthy or dealing with some lingering maladies.

Fortunately for the Hawks, no opponent is unbeatable. Improve in a few key areas, and the dream season could very well continue on into the NBA Finals, where yet another difficult test will be waiting. 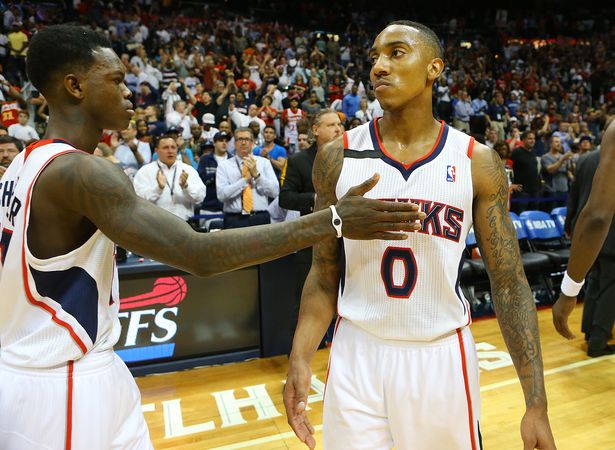 Atlanta has already endured onslaughts from a number of notable isolation scorers.

In the first round, Joe Johnson—”Iso Joe,” as Hawks fans know all too well—required some altered defensive strategies from the red-clad defense. The former All-Star scored 16.5 points per game and shot only 36.2 percent from the field, but his work in isolation still made him rather difficult to work against.

And the second round was tougher still.

After all, John Wall is one of the more deadly one-on-one players in the Eastern Conference, even when playing with five fractures in his left hand and wrist. Pierce can never be counted out, and massive improvements from Bradley Beal left him looking like a bona fide superstar. The 21-year-old shooting guard thrived in Randy Wittman’s revamped offense, fully capable of spotting up on the perimeter, but also figuring out how to score once he’d put the ball on the floor.

Thus far, the Hawks have had their fair share of struggles. According to NBA.com’s statistical databases, they’ve allowed 1.02 points per possession when facing isolation play, and that’s rather easily the worst mark of any playoff team in 2015. For perspective, Washington finished its postseason adventure one spot ahead of the Hawks on that leaderboard, giving up 0.95 points per possession.

Problem is, all those tests will pale in comparison to what comes next for the Hawks.

After disposing of the Boston Celtics and Chicago Bulls, Cleveland is scoring 0.9 points per possession in isolation, which leaves it behind only the Nets, Toronto Raptors and Golden State Warriors. But that’s not all, because James and the rest of the stars in Northeast Ohio love running this type of set. Thus far, 16.8 percent of their offense has come in isolation, and that’s rather easily the highest number of any playoff team.

Throughout the Eastern Conference Finals, it’s going to be Cleveland’s primary offensive strength against Atlanta’s biggest defensive weakness. And if the Hawks’ stoppers aren’t up to the challenge, that shortcoming is going to be exploited from the opening tip of the first game until the final buzzer of the last, with nary a reprieve.

James is the biggest culprit, and that puts an immense amount of pressure on DeMarre Carroll and Kent Bazemore, as well as the interior presences who will be asked to provide a second line of defense against the superstar’s relentless assaults on the rim. And if he’s healthy, Irving will follow suit, which makes the quick feet of Jeff Teague and Dennis Schroder all the more important.

For now, take solace in the fact that the Hawks were much closer to the middle of the pack in isolation defense during the regular season, even if the Cavs only trailed the Los Angeles Clippers on the other side of the ball.

Running offense and getting open looks is only valuable when the shots fall through the net for two or three points. Unfortunately for the Hawks, that’s not exactly what happened on a consistent basis during the playoffs, which is one of the primary reasons this team has unexpectedly dropped games to inferior opponents and squandered big leads with extended cold spells.

During the regular season, 24.7 percent of Atlanta’s field-goal attempts came in situations that NBA.com defines as “wide open,” which means that there wasn’t a defender within six feet. Another 26.6 percent came in “open” scenarios, as the nearest member of the opposition was between four and six feet away from the shooter. The Hawks shot 46.1 and 45.2 percent from the field in those respective situations.

But that was not the case throughout the playoffs.

In the postseason, 23.8 percent of the Hawks’ shots have been wide open, while another 24.5 percent have been classified as open. Problem is, their field-goal percentage in the first situation is 41.7, and it’s only 43.9 in the latter.

Kyle Korver has been the biggest culprit, inexplicably forgetting how to rain down triples in recent outings, especially when he was hounded by Beal and a Washington defense that was eager to have bigs step up on every screen. But it’s not like the other members of the Eastern Conference’s No. 1 seed has been able to pick up the slack, with DeMarre Carroll often serving as the lone exception.

But there’s hope for a massive turnaround in coming days, as this is just largely fluky. By definition, the shots the Hawks are missing are open ones, which means the defenders aren’t actually making a big impact on the shooting percentages. It’s just Atlanta fails to knock down the looks that are created, and it’s usually better to trust the 82-game sample over the one that stems from only 12 postseason contests.

And that plays right into the last key. 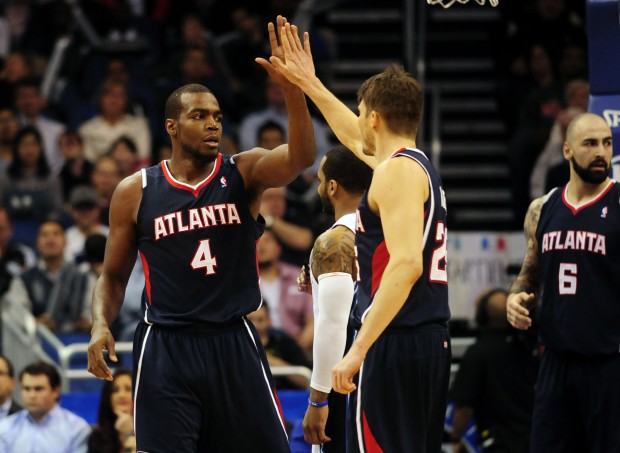 You’ve all heard the saying or seen the hashtag by now, but the Hawks themselves need to internalize it. Above all else, they have to turn the clocks back to their perfect month of January and play the brand of basketball that’s become associated with this city during the 2014-15 campaign.

Sure, the defense has had trouble in some situations, but it was a stellar, swarming unit throughout the regular season, one that made a habit out of collapsing around ball-handlers and jumping into the passing lanes to force turnovers on kick-out passes. The offense has missed plenty of open shots, but the key is that these Hawks are still actually earning those uncontested looks.

Missing shots with no defenders close by is a superior alternative to clanking contested looks off the iron, and Atlanta has to keep trusting the system that got it to this position. Keep swinging the ball around the perimeter and utilizing the underrated passing skills of the non-point guards, as the rock is always going to move faster than even the most in-sync defensive rotations.

Lest we forget, these principles have already led to some success against the Hawks’ next postseason foe.

On November 15, the Cavaliers absolutely obliterated Atlanta, winning 127-94 behind 32 points from James. But that was prior to the Hawks truly hitting their stride, as they’d actually sink to .500 one game later before breaking out in late November.

Each of the next two meetings had the opposite result. On Dec. 17, Atlanta earned a 29-point victory, then won 109-101 two weeks later. Of course, that pair of results comes with a major asterisk, as the Cavs hadn’t yet acquired J.R. Smith, Iman Shumpert and Timofey Mozgov in trades with the New York Knicks and Denver Nuggets. They were a lesser version of what they’d become later in the year.

However, the Hawks earned a third victory in early March, and that came while the Cavaliers were playing at full strength. They forced 17 turnovers in the 106-97 affair and shot over 50 percent from the field, with Horford, Carroll, Teague, Schroder, Paul Millsap and Mike Scott all scoring in double figures.

Regular-season series don’t actually have a huge bearing on playoff outcomes, but those results have to give the Hawks some confidence going into the penultimate round. This team knows what it can do, even if it’s struggled to achieve those results on a consistent basis in recent weeks.

Knocking off James and the rest of the star-studded Cleveland roster is going to be a difficult task. However, it’s by no means an impossible one, leaving the Hawks with a legitimate chance of advancing to the NBA Finals for the first time in 54 years.

Most importantly, be true to Atlanta.

6 Free Things To Do This Summer In Atlanta

8 Songs All About The Peach State!