The Atlanta market will be one of the first cities to get AT&T 5G technology as it officially launches by year’s end.

Before Sunday’s Falcons game at Mercedes Benz Stadium, AT&T partnered with Nokia and Jaunt to demonstrate the power and effectiveness of that new technology in a fun, fan-friendly format.

The demonstration – which was only the 4th 5G experience AT&T has made available to the public, was designed to give consumers a glimpse at how the power of 5G is enabling the future of mobile content and immersive experiences, like a touchdown dance-off in 5G augmented reality!

With two volumetric capture stages set up in a designated tailgate area outside the Atlanta Falcons vs. Dallas Cowboys game, fans can go head-to-head or collaborate to create an end zone dance that is memorable and shareable. The 5G was more effective than the Falcon’s offense on Sunday.

Using 5G connectivity, approx. 20 depth cameras, and the power of machine learning, visitors were able to create a 3D rendering of themselves in motion and in real-time – without the need for glasses.

In addition to the live capture stations, the fan experience included a viewing area with a miniature football field surface and tablets to view the end zone dances happening live in AR. While fans were in the booth “dancing,” other tailgaters were able to view volumetric captures streamed to AT&T Mobile devices stationed near the miniature football field. Once a dance was captured, the fan could then share the content on social media.

AT&T has been laying the groundwork for our 5G network in Atlanta by deploying 5G Evolution technologies here. 5G Evolution markets are locations where we’ve deployed technologies that enable peak theoretical wireless speeds for capable devices of at least 400 Mbps.

As Atlanta keeps growing, the need for fast data keeps growing. Data traffic on AT&T’s mobile network has grown more than 360,000% since 2007. Video traffic has increased over 75% in just the last year … and continues to be the largest driver of this growth, making up more than half of our mobile data traffic. For new technologies to be widely deployed, mobile networks will need to deliver complex and wide-ranging network management capabilities for quality, performance, bandwidth, latency, and coverage. For example, for the self-driving car experiences to meet future customer expectations, it will be critical to quickly communicate with other connected vehicles and objects with high reliability while the vehicle is in motion.

Like with any network, 5G will start with one radio and expand from there. Radios are online today across the 12 cities where we plan to launch mobile 5G this year, starting with Dallas and Waco over the last several weeks. 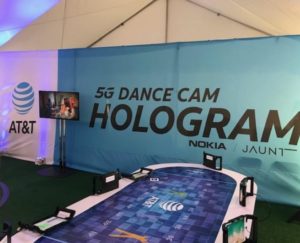 Brian Kemp's Win in Georgia Gets Tainted by Voter Suppression