As the images swim in and out of focus on the ultrasound screen, the two tiny boys appear to be holding each other. One seems to look off over his brother’s shoulder while the other has his chin tucked down, seemingly looking at the chest that joins them together and toward the heart they share.

If all goes as planned, Chance Aiden Crafton and Chand­ler Kaiden Crafton of Augusta will be delivered Nov. 9 at Georgia Regents Medical Center as conjoined twins. Their mother, Brittany, says that is God’s plan for them and that is how she plans to raise them for now.

Crafton’s first ultrasound had appeared normal, but when she went back at four months the sonographer made a shocking discovery: There were two heads and what appeared to be one chest and one heart. 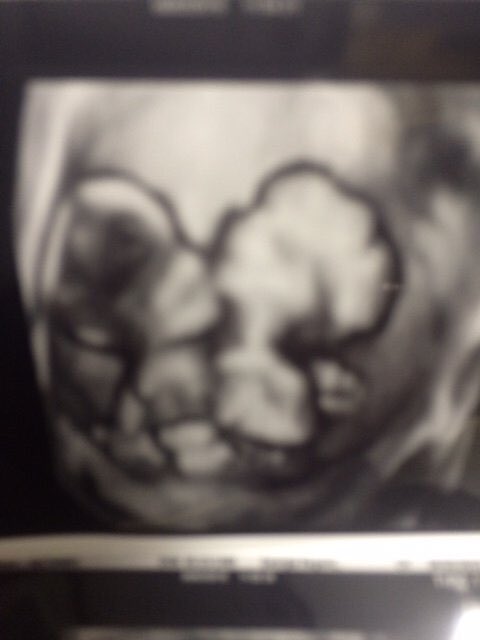 She was referred to Dr. Paul Browne, a maternal and fetal medicine specialist at GRMC, and the next day there were more tests and more images. Up on the screen, she saw it:

“The two babies and the one chest and the one heart beating, moving,” Crafton said. “That’s when it got real.”

In the U.S., the rate is estimated to be around 1 per 200,000 births. It likely happens more than that because many of those pregnancies are terminated before birth, Browne said. But that never crossed Crafton’s mind.

“It took time; it was shocking,” she said. But “right off the bat, I knew I wasn’t going to terminate. Because if it was my choice, I would like it in the hands of God. Whatever he has planned for them, he can do it himself.”

Though there is debate about how conjoined twins happen, Browne presents it as clear cut. Divisions in the embryo create twins, with divisions early on resulting in two fetuses in two placentas to later ones with two fetuses in one placenta, he said. Conjoined twins likely come from a late incomplete division, Browne said.

“Essentially, the later that the twins decide to separate, the more likely they are to share common things, like a placenta … or part of each other’s organs,” he said.

In this case, the boys appear to share a heart and a liver in their conjoined chest. Since Crafton came to GRMC, she has been through all kinds of tests to try to determine the health of those organs, in particular the heart. And there is good news.

“What is exceptional about her twins is that their shared common heart is actually pretty normal,” Browne said. “It’s been functioning very well for the kids, and we think it is going to function well for them after the delivery.”

With what appears to be good bloodflow, the boys seem to be developing normally except for their legs and feet. Both have clubfeet, where the soles are turned upward, and one has a dislocated hip, Browne said.

“They’re just very crowded in there,” he said.

So the orthopedic team has been brought into a group that already includes pediatric cardiology, pediatric surgery, anesthesia and nursing, Browne said.

As many as 20 people are meeting and consulting on Crafton’s case, some on a weekly basis as she comes in for ultrasounds and tests.

Even though she is a senior sonographer, Charla High­tower said the first time she imaged the boys their unique anatomy was very challenging. Even now, as she is doing weekly checkups, it is still difficult to do both boys, dubbed A and B for now.

“They’re getting bigger,” High­tower said as she ran through a 10-point check on their development during the sonogram, “They usually pass with flying colors.”

As she moves the wand around baby A, who is in front, he is easy to show but blocks off his brother, who appears to be almost hiding and tucking his face down.

“Is that B hiding?” Craf­ton’s mother, Bernice, said jokingly. “B is going to be the troublesome one.”

Bernice, who is a nurse, left the decision up to her daughter. But once it was made, they began to face a lot of practical questions, and Brittany said she began a furious campaign of research.

On Facebook, she reached out to a family of conjoined twins – she is not sure where – that advised her to get a lot of mittens and hats for an extended stay in the Neo­natal Intensive Care Unit.

Crafton’s obstetrician, Dr. Chris­tina Maddox, will assist in the cesarean delivery. She has reached out to baby item manufacturers for donations, Crafton’s mother said.

There are any number of issues other mothers don’t have to face. For instance, baby clothes.

“You don’t really know what size they are going to be and their clothes have to be custom (made),” Crafton said.

“It would have to be a buggy,” she said. “They are so expensive, but they are cute. The old school buggy carriage, they have a new modern kind that they make now. (But) I know you can’t put that into a car.”

“That’s another thing,” her mother said. “We have no clue about how they would be in a car, with seat belts. But I know there are conjoined twins out there somewhere who had to have something created for them. It’s going to be a big challenge. We understand what a challenge it is going to be.”

“I don’t feel any stress,” she said. She does have cravings, specifically for pizza. “It has to be spinach, bacon and pepperoni,” she said.

The twins are also letting her know they are there.

“They move the most when I am at church but if I’m going to sleep, it is like one at a time,” she said, laughing. One will kick low in her abdomen followed by a blow higher up from the other.

Both she and her mother are relying on their faith and prayer for strength.

“Definitely, we’ve been praying through it all,” Crafton’s mother said. “We’re praying for a miracle. Some­how, we know there’s a purpose for this. And we know that he has a purpose for them. We just feel like whatever his will is for this is going to be good.”

When the twins are delivered, there will be teams from the NICU to take them and then other teams that will evaluate them, from orthopedics to heart specialists to surgeons to others, Browne said.

Depending on how things look and progress, they could be in the NICU for at least a week to 10 days and will be constantly evaluated to see whether what appeared on imaging turns out to be true, such as the strength and health of the heart, Browne said.

“Is there enough liver for two kids or just for one?” he said. “And of course, lots of heart tests to try to figure out if the heart is going to be strong enough to take care of both of them.”

Orthopedics will be evaluating the feet and hip. As far as one day separating the twins, that would have to wait, Browne said. Because they share a heart, they would need a donor heart for one of them, and Crafton would likely have to go to one of the half-dozen places that do heart transplants in children and wait, Browne said.

Crafton said she has not thought too much about it and seems at peace with raising them as they are. But she has no illusions that it will be easy. She knows it will be tough for her and for her boys, and the scrutiny that will likely follow them.

“But at the end of the day, when it is your child, you do what you have to do,” she said.