If you read that headline and thought “what? Mercedes, duh!” That was my exact thought, too, when I relinquished my keys to my press loaner 2017 Mercedes SLC 300 and received the Fiat keys in return. I’d rather have a $64,000 convertible over a $32,000 one any day!

But as the miles rolled by in the Fiat on that blessedly warm December day, things quickly became muddled…

More on why in a bit, but first, let’s go over what makes each of these cars special: 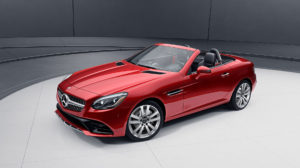 The SLC 300 replaces the SLK, joining the mid-ranged “C” family of the Mercedes lineup alongside the C-class sedan and GLC-class SUV. In line with the Porsche Boxster and Audi TT, the SLC eschews the 6-cylinder engine of its predecessor for a turbo-four pumping out 241 horsepower and 273 ft-lbs of torque.

Two things separate the SLC from its luxury convertible competitors; the sophisticated hardtop, which creates a quiet, coupe-like cabin, and the AMG bits like the suspension and exhaust. When you put your foot down in this car it sounds like the Iron Giant stepping on a Lego. 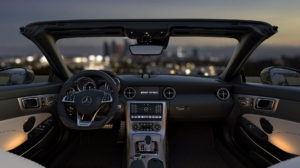 So it’s a comfortable, powerful 2-seater with an AMG soundtrack and precision handling. Obviously it’s insanely fun to drive, but will its hefty German price tag justify itself when weighed against the budget-friendly, Italian competition? 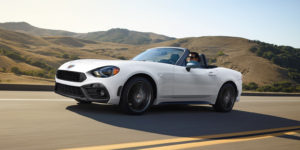 On paper, the Fiat 124 is a recipe for automotive perfection; take the insides from the greatest roadster of all time, the Mazda Miata, and let Italians style the outside into a thing of beauty. The result should be the Mona Lisa with wheels.

Two things went wrong: Fiat-Chrysler made the suspension a bit too soft, and the gearbox is from the last-gen Miata, so it’s not perfect. But the result is a delightful mutt, brimming with aformentioned Italian beauty and driving character. It’s a car for cruising Sonoma wine country, not Sonoma raceway, and that’s perfectly OK. 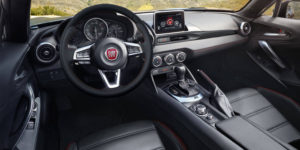 Under the hood lies a turbo-four churning out 160 hp, and overhead sits a traditional, manually-operated soft top. Fiat borrowed Mazda’s infotainment system so everything is easy-to-use, and the seats provide excellent side support for the occasional hard corner. Overall, the 124 is a much-needed victory for Fiat, whose lineup has suffered critical disdain in recent years.

There’s no need for a boring stat-filled chart here; the Mercedes is faster, handles better, is more comfortable, and quieter on the road. Comparison over? No way, because as mentioned, the Mercedes is almost exactly twice the cost of the Fiat 124. So is it worth it? Which one would I buy?

The Mercedes easily trumps on the highway because of its hardtop, which effectively turns the SLC into a true coupe. The soft top on the Fiat, while significantly lighter, lets highway and road noise seep in. It’s simply un-fun to drive the Fiat on the highway, whereas the SLC feels like any other luxury sports car.

Cabin space in both was a hugely pleasant surprise. I expected the hardtop in the Merc to shave the top of my head, but the curls survived. My friend Laney, daughter of the founder of Caffeine and Octane, also approved. 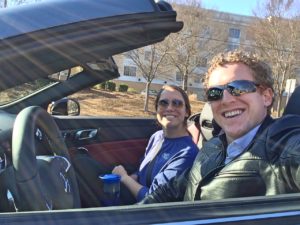 Things were a bit tighter in the Fiat 124. I fit nice and snugly with no complaints, but when I picked up my friend David, a 6’5 champion shot-putter, his first words were “this is going to be a problem.” 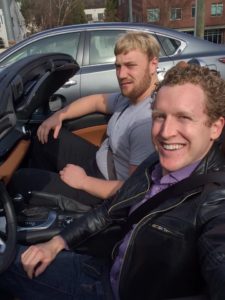 But despite the shock of fitting a 6’3 man like myself, neither car can be called a grand tourer; cargo space is laughable in both. Mercedes claims the SLC has 6.4 cubic feet of cargo space, but I’d wager the hardtop takes roughly 3 of those cubic feet away, leaving room for a few Trader Joe’s bags but certainly not a pair of suitcases. You might be able to cram two duffel bags in the back of the Fiat, but the car oddly lacks a glove compartment. Given the comical lack of space in both of these cars, don’t be surprised if your SO wants to take the SUV to the lake instead.

In terms of MPG, both cars pleasantly surprised me; spirited jaunts around Atlanta netted ~24 MPG in the Merc and ~28 in the Fiat. Neither is too thirsty.

Handling-wise, the Merc would have a hard case against a Miata on good tires, but could easily out-maneuver the Fiat. For daily driving both are delightfully cushy yet agile (thanks to the SLC’s active dampers), but I wouldn’t take the Fiat to the track.

To wrap up, both cars make up for paltry cargo space by being ridiculously fun to drive. The SLC is more comfortable and civilized in Comfort Mode than the Fiat and more aggressive and thrilling in Sport+ Mode. You get a better Jekyll and Hyde experience in the SLC 300, which to some, will be worth the extra $32,000.

But not to me. While I’d rather drive the Mercedes, with its orgasmic AMG-tuned exhaust note, razor-sharp handling, and gorgeous cabin, I’d rather live with the Fiat 124. The latter provides 80% of the fun of the Mercedes for half the cost, a little more trunk space, and much greater ease-of-mind.

If you can afford an AMG-tuned Mercedes convertible, huge congratulations, you’re going to love it. But for those of us looking for budget-friendly smiles-per-mile, the Fiat provides in spades.

Hawks Paul Milsap Being Shopped Around for Trades