Atlanta is playing a part in the return of professional tennis with the Exo-Tennis series of exhibitions featuring local Atlanta college players and professionals with other professionals from across the country.

Exo-Tennis is the first group to bring live professional tennis back after COVID-19 suspended play and has been hosting events in Germany since the beginning of May. Exo-Tennis is utilizing video technology from PlaySight to provide full-service automated production broadcasts, minimizing the need for manpower and production crews. PlaySight is live streaming the matches free of charge. Exo-Tennis matches are taking place in Atlanta.

Tournament Director Viv Chhetri explains, “I think the players enjoyed competing after a long time off. They were tired of sitting in the house. It’s good for them to interact with people in general.

Just this past weekend, local player Taylor Townsend defeated Sachia Vickery 6-2, 6-3 on Friday. The four-day event was the fourth and final group of matches between tennis professionals, top-level college students and a high school player in metro Atlanta.

Townsend reached No. 61 in the WTA rankings two years ago while Vickery topped out at No. 73 in 2018.

Townsend was dominant at the net and also utilized powerful left-handed ground strokes. A long-time Atlanta resident, Townsend began the first set with two breaks to take a 3-0 lead. After Vickery bounced back with a break in the fourth game, Townsend got another break to go up 5-2 and then finished out the first set with an ace 6-2.

In the second set, Vickery dumped a second serve into the net, giving Townsend a break in the third game. While Vickery stood firm later in the second set, she failed to hold serve in the match’s final game, losing 6-3.

Matches were played Tuesday, May 26, through Friday, May 29, at the Peachtree City Tennis Center, using no-ad scoring. The eight-player field had a round-robin match with each opponent, culminating in a series of playoff matches on Friday. Some of the women also played in a similar event May 18-21.

Townsend talked about playing eight days over the last two weeks. “Last week was really tough on the body. I felt better this week than last week,” she said, adding, “I was just glad to get through it.

Vickery said, “She serves and volleys and that’s tough to play against. I knew what to expect. It’s the end of the week and just so happy that I could finish.”

Asked about playing in the same city for three weeks, Townsend said, “I honestly think that it’s a good concept. Traveling takes a toll on you and how you feel to play matches.” In July and August, Townsend will join fellow Atlanta pro Donald Young and play for the World Team Tennis’ Philadelphia Freedoms at The Greenbriar resort in West Virginia.

Last week, there was men’s action.

Former world No. 38 Donald Young downed two-time ACC Player of the Year Christopher Eubanks Monday in the Exo-Tennis Exhibition. The four-day event was third in a series of competitions between tennis professionals and top-level college players in metro Atlanta.

Veteran Young, of Atlanta, showed his ability to bear down when the competition grew tough, defeating the longtime Atlantan Eubanks 7-6(7), 2-6, 1-0(4). Young hit a career high in 2012 and has reached four ATP finals, two in singles and two in doubles. Eubanks (No. 147) was selected for the 2018 Oracle US Tennis Award and received a $100,000 grant to help further his career.

In the first set, Young broke to open the match. And it wasn’t until Young had a chance to serve for the set that Eubanks returned the favor. Late in the tiebreak, the players won four consecutive minibreaks, setting up two set points for Young and Eubanks’ sole set point. Young prevailed on his fourth set point when Eubanks hit a down-the-line forehand wide.

Former Georgia Tech star, Eubanks bounced back with two breaks in the second set. He double faulted on his first set point but then hit an ace at deuce to win the set, 6-2.

Both players were rolling along in the match tiebreak, reaching 4-4. From there, it was all Young, as he was able to pressure and frustrate Eubanks with a variety of penetrating ground strokes and volleys.

While only six years apart in age, Young, 30, has served as mentor to Eubanks, a former Georgia Tech player who has also been Young’s longtime practice partner. Friendly chatter and a few smiles were exchanged during the hard-fought match. Young has lived his entire life in Atlanta; Eubanks recently moved away from the Georgia capital to train at the USTA National Campus in Orlando, Fla.

Look for more Exo-Tennis in and area, as these top players look to keep their form until tour tennis returns.

Thanks to Ron Cioffi / KRC Communications for the images. 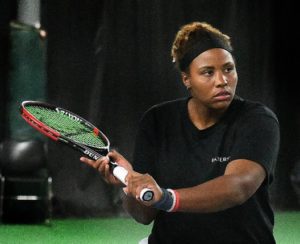 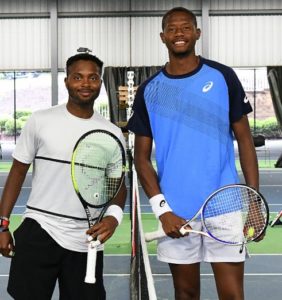