No fans, but still a great day of racing in Atlanta.

Kevin Harvick has had an exceptional relationship with Atlanta Motor Speedway and the 2014 NASCAR Cup Series champion showed that again Sunday afternoon winning the Folds of Honor QuikTrip 500, his third victory at the historic track.

Truex led 62 laps, won the opening two stages of the race and kept Harvick’s No. 4 Stewart-Haas Racing Ford honest. Harvick passed both JGR Toyotas to open the third stage of the race and held them at bay to win by a healthy 3.527-seconds. Busch passed Truex for second with five laps to go.

It was Harvick’s second victory of the season (he also won at Darlington Raceway in NASCAR’s first race back since the sport was sidelined during the COVID-19 pandemic) and it is the 44-year old Californian’s ninth top-10 finish in 10 races this year. With it, Harvick extends his NASCAR Cup Series championship lead to 48 points over Penske Racing’s Joey Logano.

Logano’s teammate Ryan Blaney and JGR driver Denny Hamlin rounded out the Top-5 at Atlanta followed by Kurt Busch, Jimmie Johnson, Chase Elliott and Penske Racing teammates Brad Keselowski and Logano. For Kurt Busch, the Top-10 was an especially impressive effort considering he started last in the field because of inspection violations.

Clint Bowyer led 58 laps only to have to pit late in the race and fall out of a Top-10 finish. He ended up 20th.

Harvick’s Ford was considered the car to beat at Atlanta even before the retiring seven-time NASCAR Cup Series champion Johnson gave the command to start engines Sunday afternoon.

Harvick earned an emotional career first NASCAR Cup Series win at Atlanta back in 2001, three weeks after taking over driving duties for the late seven-time champion Dale Earnhardt, who was killed in the Daytona 500 season-opener. Harvick held up three fingers in a reverse victory lap Sunday in honor of Earnhardt and the champ’s famed No. 3 car.

“First [career] win came for me here at Atlanta and this is just a race track that I’ve taken a liking to,’’ Harvick said. “You always have those memories and now you want to celebrate everything that Dale Earnhardt did for this sport. To come here and be able to do that with wins and go to victory lane is pretty special.

“We had a great pit stop, got to restart on the bottom and got my car to take off and I was able to get track position. Once I could get through those first 10 laps and my car was freed up enough I could get in a rhythm and really hit my marks, then with about 25 laps I could just drive away.’’

Harvick has certainly been the driver of record as of late. He answered that first win 17 years later (in 2018) and is currently in the midst of an amazing nine-year run at the track. He’s now led at least 100 laps in seven of the last nine races – more than 10,000 laps out front since joining the Stewart-Haas Racing team in 2014. And he’s earned Top-10 finishes in nine of the last 11 races.

Truex Jr.’s two stages wins were the 2017 NASCAR Cup Series champion’s first of the season. And for much of the race, he was there ready to interrupt Harvick’s longtime dominance at the track. That opportunity never came.

It would have been the first win of the season for Truex, who has been so-close at Atlanta -finishing second in 2019 and scoring Top-10 finishes in the last six races.

Tyler Reddick, driver of the No. 8 Richard Childress Racing Chevrolet, was the top finishing Sunoco Rookie of the Year candidate – with a 16th-place finish.

Prior to the race NASCAR President Steve Phelps addressed the race field and the nation pledging that the sport is absolutely sensitive to the country’s current social unrest and committed to improving race relations. 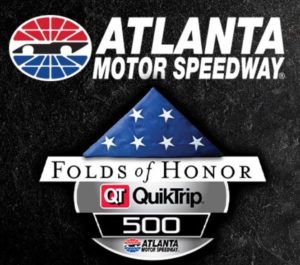 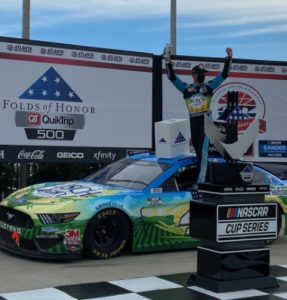