Monday evening at seven, students gathered at the Russell Student Union to march to the Bulloch County Courthouse in protest over the decision by a grand jury to not indict Officer Darren Wilson. Officer Wilson was involved in the shooting death of Mike Brown, an unarmed 18 year old. The incident occurred on August 9 in Ferguson, Missouri. Over three months later on November 24, a county grand jury decided to not indict Officer Wilson. The decision has sparked a good deal of controversy and unrest over issues such as; if racism is still an issue (at both the social and institutional level), whether or not it is necessary for police to have military grade equipment, and when is “deadly force” okay? There have been many protests nationwide in major cities and on college campuses, most of which have been peaceful. 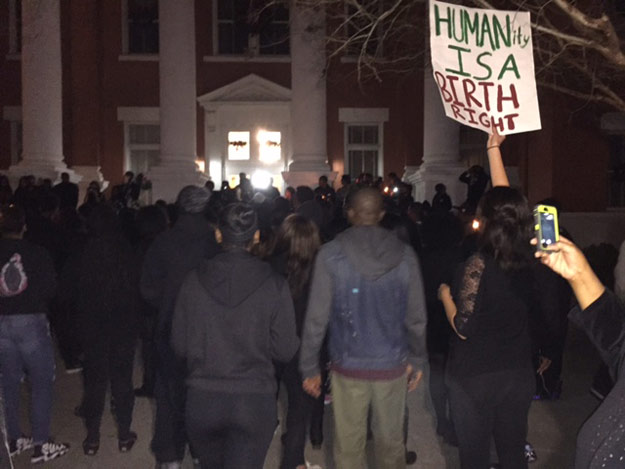 Like many other protests, the demonstration at Georgia Southern was peaceful. Before the group left the rotunda one of the organizers gave a speech preaching solidarity and togetherness. After the speech there was a four and a half minute moment of silence in reflection of what happened in Ferguson. Once the moment of silence had concluded, the students joined with a few faculty members began their march to the Bulloch County Courthouse. Police officers along the way provided safe crosswalks for the demonstrators. Chanting “Know Justice, Know Peace” and “Hands up, don’t shoot”, the protestors peacefully marched their way up to the steps of the Bulloch County Courthouse.

Why Does Ferguson Matter to Georgia Southern?
Ta-Shon Grady, a 24 year old psychology major feels that Ferguson matters for a few reasons: “I feel like it definitely does matter for a couple of reasons. One of the main reasons is that even though Georgia Southern is a very diverse campus, a lot of the time a lot of us minority students feel left out of certain things. We feel like when it comes to a lot of different situation we are often put in the hot seat, we tend to feel the heat coming from the authorities. So we felt that after Ferguson went down we needed to be that change that we wanted to see so we started pushing and trying to get our peers involved.”

Kenneth Queh, a 20 year old Biology-Chemistry double major, believes the Ferguson decision matters because the injustices it brought forward: “The [court’s decision] goes and shows how minorities are looked at just as a whole. Not just the Ferguson case either, there are many other similar cases that go undisclosed, but cases like Mike Brown’s shine a light on the judicial system.”

Khalil Barrett when asked why Ferguson matters to Georgia Southern students, he thought that it mattered to everyone and not just college students: ” Yeah, it definitely affects all minority groups across the nation. The decision just reinforced the precedent that black lives are worth less than white people’s.”

Charlene Lysius is a 20 year old Exercise Science major, who like Andrew, agrees that the Ferguson decision is also about an abuse of authority and not just race: “For someone in authority to take another person’s life in their own hands is just inappropriate. It’s not even about just black people, it could be anyone even a white person… Anyone can become Mike brown, my twelve year old brother had a gun pulled on him on his way to school and luckily he wasn’t gunned down like [Brown] but it just goes to show it can happen to anyone… For someone to just assume that it’s just okay to determine what someone’s life is worth is inappropriate. Not just Black lives matter that just seems to be what is happening today.”

Brody Perloff, a 22 year old criminal justice major, does not believe Ferguson honestly matters: “Things like [Ferguson] happen all over the country that don’t pertain to other people. It’s a shame that it happened, but I don’t think it applies to us… I’m a Criminal Justice major and I’m going into law enforcement after this. If I ever felt my life was in danger I would use deadly force if I had to.”