The three-day Atlanta Open ran through Sunday and featured 16 men’s and 16 women’s teams competing for a $300,000 purse, the largest of the season. It was the ninth event in a 2022 AVP schedule that includes 16 tournaments in 12 states across the country and offers $2 million in prize money – the most comprehensive tournament slate for the AVP since 2009.

“I’m so thankful,” Partain stated. “My parents have helped me so much getting to all the practices in Hermosa (Beach) and helping me travel around.

The women’s title was claimed by former University of Southern California players Geena Urango and Julia Scoles, who upset top-seeded Sarah Sponcil, a 2020 Olympian, and Terese Cannon, 21-17, 12-21, 16-14 in the final match. Urango and Scoles had lost a second-round match to fall into the contenders’ bracket of the double-elimination tournament. They came back for victories against teams seeded 13th, third, fourth and second in reaching the finals.

Milestone wins for Urango, 32, who won for the first time in her 56th career AVP tournament. Scoles, 25 and a two-time beach volleyball NCAA champ at USC, won in her ninth career AVP start.

Sarah Sponcil and Terese Cannon, the top-seeded women, have yet to lose a set this tournament. Olympian Sponcil and her NCAA national champion partner, Cannon, defeated ninth-seeded Emily Day and Savvy Simo.

It was revenge for Cannon, who was eliminated by Simo last year in Atlanta. Sponcil and Cannon will aim to keep their streak alive Sunday when their match resumes against Atlanta’s defending champions, Taryn Kloth and Kristen Nuss.

Top-seeded men Theo Brunner and Chaim Schalk fell victim to their second-round opponents, ninth-seeded Evan Cory and Bill Kolinske, in straight sets 21-19, 25-23. They were up 14-12 in the first set of a contenders’ bracket battle against Timothy Brewster and Kyle Friend, the 13th seeds, when play halted Saturday night.

In the first meeting between the sixth seed, Canadian Olympian Brandie Wilkerson and Zana Muno, and the three seed, U.S. Olympian Kelly Cheng and Betsi Flint, the former pulled off a significant upset, overcoming Cheng and Flint in a 21-12, 21-19 sweep. It was deja-vu for Cheng, who was eliminated by Wilkerson in the Tokyo Olympics just last year. In this matchup, the duo could not compete with Wilkerson, who totaled seven blocks at the net. Muno and Wilkerson will take on Sara Hughes and Kelley Kolinske, the two seed, in the winners’ bracket quarterfinals tomorrow.

Tri Bourne and Trevor Crabb eliminated Andy Benesh in Atlanta last year in the fifth-place match, and on Saturday Benesh got his revenge alongside his partner, two-time Olympian Nick Lucena. The final score was 22-20, 21-17, and Benesh recorded six blocks and three aces alone. With that, the seven seed snagged a spot in the men’s quarterfinals against sixth-seeded Paul Lotman and Miles Partain, who kicked Olympic gold medalist Phil Dalhausser and fellow Olympian Casey Patterson into the contenders’ bracket after an 18-21, 21- 18, 15-11 victory. 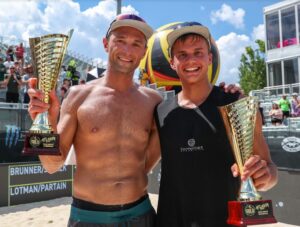 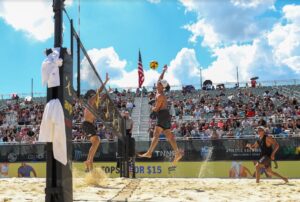 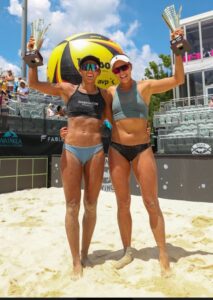 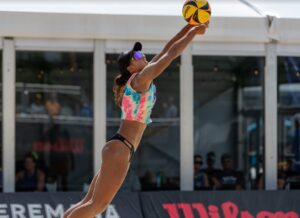 Shoe Shopping with Hawk's No. 1 Pick, AJ Griffin at The Athlete's Foot in Atlanta