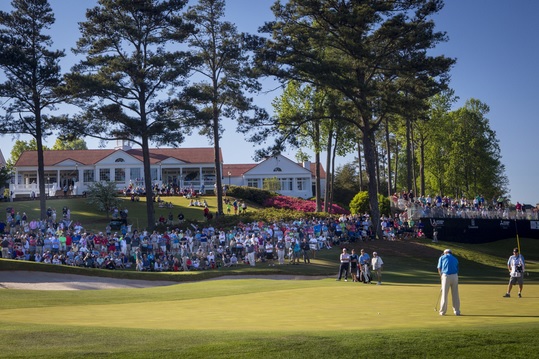 Golf Fans in for Treat in Gwinnett this May

Golf fans will have the opportunity to watch seven former Masters Tournament victors in action when Georgia’s only PGA TOUR Champions event returns to TPC Sugarloaf May 10-16.

Vijay Singh soared to new heights as a professional when he captured his first Masters Tournament win in 2000. Singh earned his green jacket with an approach to eight feet on No. 17 and by birdying No. 18 to claim victory by three strokes over Ernie Els. Singh has 34 PGA TOUR victories and four TOUR Champions triumphs.

Mike Weir recorded just the fourth bogey-free final-round by a winner in the history of the Masters to win in 2003. Weir sunk a 6-foot putt for par on the 18th hole to force a playoff where he defeated Len Mattiace with a bogey on the first extra hole. This is Weir’s first appearance at the Mitsubishi Electric Classic.

World Golf Hall of Famer José María Olazábal won the 1994 Masters by three strokes over third-round leader Tom Lehman, and added a second green jacket when he finished the 1999 tournament two shots ahead of Davis Love III. With six PGA TOUR titles and 23 international wins to his credit, Olazábal competed on seven European Ryder Cup teams between 1987 and 2006 and served as captain in 2012, recording a stellar resume of 18 wins overall.

Additional green jacket winners in this year’s field include:

World Golf Hall of Famer Sandy Lyle, who had a breakout year in 1988 when he was the one-stroke victor over Mark Calcavecchia, was the first British winner of the Masters. The Scottish resident and five-time European Ryder Cup player also captured four titles and two major victories during his time on the PGA TOUR.

Mark O’Meara, who closed birdie-birdie to edge Fred Couples and David Duval and win the 1998 Masters Tournament, is a World Golf Hall of Famer with three PGA TOUR Champions victories.

Ian Woosnam holed an 8-foot par putt and edged out Olazábal for a one-stroke victory at the 1991 Masters. Woosnam has one PGA TOUR Champions victory.

“Welcoming these athletes, who have stood victorious on one of the biggest stages in golf, is an honor, and we’re thrilled they are part of this year’s field,” says Monte Ortel, executive director of the Mitsubishi Electric Classic. “These players represent a who’s who of golf and bring a rich history of play to our tournament.”

These previous Masters champions will be joined by 73 other PGA TOUR Champions professionals who are vying for a $1.8 million purse while also earning points in the race for the Charles Schwab Cup. The remaining field will be released in the coming weeks.

In response to COVID-19, the Mitsubishi Electric Classic is following all State of Georgia and PGA TOUR health guidelines to ensure the safety of athletes, fans, staff and everyone else involved with the tournament.

A great event to kick off your summer!