David Sims was the all around nice guy off the field but once he got onto the field he became a lean, mean running machine. All joking aside, Sims was a vital part of a lot of amazing moments in Georgia Tech football that we will now remember forever. We recently had the opportunity to talk with Sims through email. Below are the questions along with the answers that were in the brief conversation. 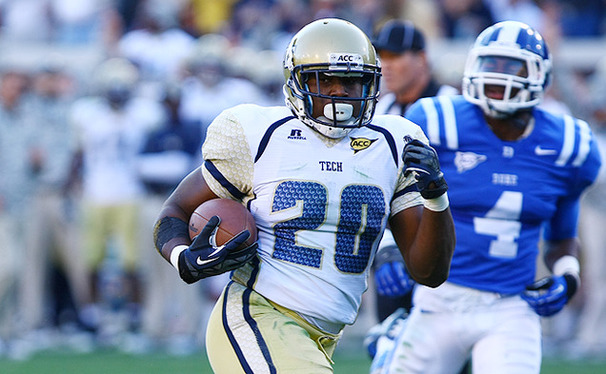 GAFollowers: What did you enjoy most about playing football for Georgia Tech?

Sims: I think I enjoyed the atmosphere we got to experience every time we took the field. The great night games at Bobby Dodd with the skyline view and the trips to other schools and coming back with a victory. I think that’s what I enjoyed the most.

GAFollowers: Is there any one game that you will always remember during your time with Georgia Tech?

Sims: I actually have two the game against Clemson when we ended their winning streak when they were #6 and the game against USC finally getting that bowl victory for the first time in years, those two stick out the most to me and will always be remembered and treasured.

GAFollowers: What have you been up to lately? Any plans to go pro, join the Arena Football League or anything like that?

Sims: I’ve been relaxing for the most part if an opportunity to go pro came up I probably would take it but for now I’m thinking about getting on the sidelines and possibly becoming a coach sometime in the near future.

GAFollowers: Do you miss the routine you had as a student athlete?

Sims: I actually do miss the routine as a student athlete it’s weird because while you’re going through it you don’t particularly care for it but afterwards you do it. Going to class and then practice and then looking forward to doing nothing on Sundays all of that was good times.

GAFollowers: What is your take on how well the team has played this year? Do you think Justin Thomas is a good enough QB to lead the Yellow Jackets to national recognition again?

Sims: The team has played solid so far this year I think it’s taken a few close calls to get them to realize their identity but I actually think the team’s best ball is actually ahead of them later on this year and that’s a good thing to not peak early but at the right time during the middle to end of the season. Justin is a good enough quarterback the key is to make sure he can stay healthy. He quick crafty, and actually one of the smarter players to come in his class and that’s something people don’t know about him and he has a cool demeanor, part of the reason he’s named Smoov.

GAFollowers: Have you been following the NFL this year? Who do you like to win it all?

Sims: I always follow the NFL it’s always good to see people you’ve played with, against, and knew from playing ball getting their chance to make a mark in the league. I don’t have a favorite to win it all but a Superbowl rematch from last year isn’t out of the question.

GAFollowers: Have these questions been fun to answer?

Sims: Haha yeah I am these are pretty good I feel like I’m on the hot seat or something.

GAFollowers: Haha and last, what do you see yourself in 5 years?

Sims: In 5 years I can see myself either as a coach or possibly running a business somewhere but who knows it’s still people 30 years old who don’t know what they want to be when they grow up lol

What Georgia Tech Thinks About UGA