Jane Little, the 87-year-old bass player who recently set the world record for the longest tenure with an orchestra, passed away on Sunday during a performance with the Atlanta Symphony Orchestra. Little had played with the ASO for 71 years, since her debut at age 16 on February 4, 1945 — her final song on Sunday was Irving Berlin’s “There’s No Business Like Show Business.” In a statement praising her lifelong dedication, the ASO wrote: “We can say that Jane was fortunate to do what she loved until the very end of her storied life and career. The Atlanta Symphony Orchestra was truly blessed to have Jane as part of our family for the past 71 years and we all miss her passion, vitality, spirit and incredible talent.”

Little grew up in Atlanta during the Great Depression and, while her family was too poor to afford them, she loved instruments and music. The orchestra leader at her high school recognized her aptitude for music and told her that they needed a bassist. After a month of lessons, Little says that she was “hooked,” adding that “it was awfully difficult to push those heavy strings down, and to carry the instrument around, but I just loved it.” During her sophomore year, she joined the Atlanta Youth Symphony and stayed on when it became a professional symphony, the Atlanta Symphony Orchestra, three years later.

Little went on to play for decades, many of them alongside her husband Warren Little, a flutist who passed away in 2002. As the years progressed, playing become more challenging, especially given the size of her instrument. “I must be the smallest bass player in the country right now in a major symphony,” said the 5 feet (1.5 m) tall musician in a recent interview. “I’ve had to work a lot harder to do what I do.” She had been in the midst of cancer treatment for multiple myeloma and planned to retire at the end of this season. On her 71st anniversary with the ASO in February, Little was greeted with a five-minute-long standing ovation, after which she reflected, “Seventy-one years ago. It’s hard to remember when I wasn’t here.” 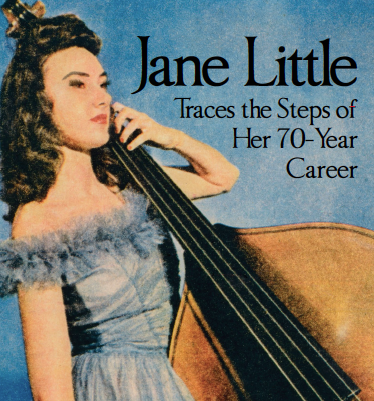 And, there’s no question that her dedication to her art will be long remembered; as fellow bassist Michael Kurth reflected after Little’s death: “To me, it seems like more than the end of an era. She outlasted every era of this orchestra. She outlasted three music directors. The next, most longest tenured member was here I think twenty years less than she was. There are no words to describe how remarkable she was. You think of superlatives and you just run out.”

You can read a recent interview with Jane Little in the Atlanta Magazine at: http://bit.ly/1PWDHb7