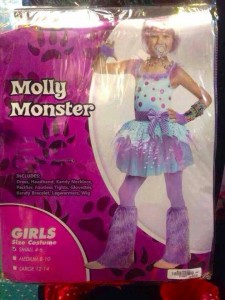 I’ve seen some pretty crazy costumes for Halloween. Being a college kid, you see several of the college boys sporting the either racially risky or downright dirty costumes throughout the night of debauchery. But never have I seen something like “Molly Monster.” Let alone, for girls under the AGE OF TWELVE.

Especially after the uproar all over the United States about the dangers of MDMA, or Molly, the release of the Molly Monster costume is something making parents scratch their heads, or taking the costumes and hiding them in the very back of the shelves. The different connotations that come from Molly Monster are both enraging civilians and EDM fans alike. Being an EDM fan myself, I would honestly not dress my hypothetical daughter up in this outfit, I don’t want to dress her in a drug reference without her awareness…she can be a princess…or supergirl. That’s nice and safe.

This costume also exists for adults. However, I’m not sure if someone would be able to find a pacifier on a woman attractive. Even on Halloween.

[via Live For Live Music]