Monday Night…A Beer for Every Night

Amongst the creative hotbed of urban growth that is West Midtown, ATL, lies a rising star on the Atlanta beer scene. Monday Night Brewing started back in 2011, but the true origin begins in a garage. In 2006, three friends (Jonathan Baker, Jeff Heck, and Joel Iverson) put on their beer scientist caps and started experimenting with techniques that would eventually create witty, tasteful, and energetic beers, which we know today as the Monday Night lineup.

The beer brewing started as a hobby to escape the grind of the everyday white collar business life. As time wears on, as it always seem to do, the three grew to realize that their hobby could be made into more than that. Each provided a different talent and background- one with a marketing background, one with experience in private equity, and the other an operations consultant, which together formed a beer making dream-team.

The spirit of Monday Night is exemplified in the people, and that spirit translates to the beer. In only four short years, they have put out over 20 variations of beer, ranging from IPA’s to seasonal ales to their “Laissez-Faire”, Black Tie Series beer, which ages in French oak red wine barrels in order to develop a wine-iness to go with its wheat-iness.

The wit of the Monday Night people is all over the place; take a gander at any of their bottles, packaging, wall space, MySpace*, and you will find cleverness to go with their craftiness. Much of the text embarks the drinkers mind into a profound voyage of the soul, just in case the beer alone does not do so. I especially enjoy the quote by G.K. Chesterton on the label of my favorite beer, “The Fu Manbrew”, which reads:

“In the perfect stranger we perceive man himself; the image of God is not disguised by resemblances to an uncle or doubts of wisdom of a mustache.”

* I cannot confirm that they have a MySpace.

The brewery itself is filled with nostalgia and artifacts that will help visitors escape the working life grind in order to truly chill out for a bit. There is a wall of ties, where guests can pin their reminders of the 9-5 life and leave the day’s spreadsheets where they belong- in the past. Visitors will also notice a lot of Bryan Adams memorabilia, there is a story there. Just ask.

Beyond all of the intellectually stimulating materials, there are some GREAT beers. They have their five core beers, which you can count on year round, and include everything from a Pilsner (Nerd Alert), to a Scotch Ale (Drafty Kilt), to an American IPA (Eye Patch Ale…not just for pirates).

I, however, especially enjoy the trendy beers. They have their “Clip-On Series” lineup, which provides beer for the season. I fell in love with the “Cinnamon-Cocoa Drafty Kilt”. This beer sparks a warmness inside due to its bits of cinnamon and chocolate malts…the Monday Night website says to pair this fella with: “red meat, chocolate, and cinnamon desserts”. What they don’t tell you, is that this beer will in fact make you believe in Santa Clause again, because this is his favorite beer.

Their “Black Tie Series” beers are a more formal variation of the Clip-On Series. These beers are only released during limited times and in limited quantities. These are the quantum theory of beer- those who get the honor of trying them speak of their majestic qualities, but they are so rare that only a handful of worthy drinkers get to experience them. Staying true to their origins, these beers can be gone in a flash, so pay attention and strike when the iron is hot. (Striking while the iron is hot means to just stay updated, through social media perhaps)

I asked Jonathan Baker, their “Marketing Guy and Master of Mind Control”, where the inspiration comes from in forming a beer. He said: “In new beer, we look for creative balance, a layered beer that can be paired with food.” He echoed that all their beers are made to be enjoyed with food, aka: on any day or night of the week. For instance, Fu Manbrew goes well with sushi, and Gun Show can team up with spicy foods… or pears, because this beer is infused with pears during the brewing process. This dedication to their craft is what makes Monday Night so special, they do not cut corners in hopes of economic efficiency, they would prefer quality over quantity, and experience over time.

So, if you’re looking for a place to get away from the grind, why not loosen the neck tie, take off the heels, throw on some sweatpants if you wish, and head over to Monday Night Brewing. They have a beer for every occasion, and people that will make you feel united. 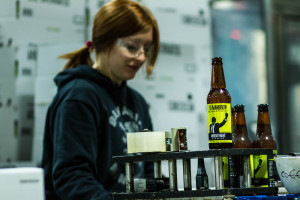 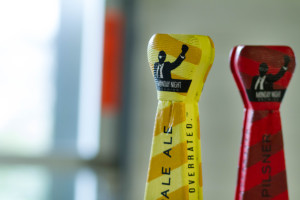 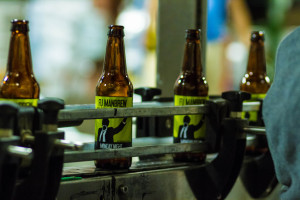 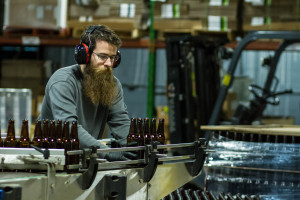 Notre Dame Coach Goes Over the Top for Demetris Roberston

Georgia State's Library is NOT Safe - 3 Robberies in 3 Weeks