In a move that has confused many people, the Atlanta City Council has made a proclamation that they will form a committee to investigate the practicality of hosting a music festival in the city.

According to the AJC, the 13 person committee would be made of one member selected by the mayor and one by the City Council president. Three members would be chosen by city council members, and the rest would be chosen by entertainment and tourism related departments such as the Visitor’s Bureau, Governor’s Office of Film and Entertainment and the city’s Commissioner of Parks & Recreation among others.

For anyone outside the city, it may seem like a practical move. Perhaps political leaders just want to make sure Atlanta can handle hosting massive music festival before they actually welcome one on the Georgia streets—but therein lies the confusion.

Atlanta isn’t a city preparing to break into the music festival scene. It’s a city that has already been an active part of festival season with events like Shaky Knees, 420 Fest, Shaky Beats, Music Midtown and many more. In 2016 alone, there will be more than 50 festivals in the city and that doesn’t include some of the major conventions that take over the metro area as well. 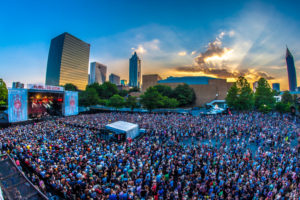 However, it’s fair to point out that the music festivals that Atlanta has hosted so far have all been put on by private companies. The event that the committee is looking into would be put on solely by the city, which would introduce its own string of hurdles and obstacles.

Some festivals around the country that inspired the City Council to form the committee are Summerfest in Milwaukee, Taste of Chicago and the Austin Urban Music Festival.

One difference between some of the private festivals and the ones run by the city are ticket prices. A two day pass to the Austin Urban Music Festival costs $65, while Taste of Chicago is free. Summerfest in Milwaukee offers an eleven day pass for only $90, and the bands at these festivals are very well-known including Billy Idol, Willie Nelson, Styx, Nelly and Weird Al just to name a few. A three day pass to Shaky Knees was $215.

The city has more to gain by just getting enough tourists and locals to come together in the metro area for fun and entertainment but the corporations behind the private festivals are hoping to get back most of their investment in ticket prices alone.

In a resolution released by the Council, the committee said it wants to see if the event would be beneficial to Atlanta.

The resolution said that the festival should “be a driver of economic development to local businesses, increase tourism, and promote a sense of civic pride.”

The committee will meet at least four times a year, and it hopes to have a resolution two years after it is appointed.

Georgia Ranks Among Most Dangerous Cities