One Night With Sleater-Kinney and a B-52

Sleater-Kinney pose with Steve Alexander and Alison King at the Tabernacle.

I have several jobs, most of which involve writing about sports. And one of those jobs is being the fantasy basketball editor for a popular website called Rotoworld. Over the last 15 years or so, I’ve picked up quite a few fans along the way, many of which are rock stars, and most of those were at one time personal heroes of mine, and now, in many cases, my friends. The list of names is a long one and I try to shy away from being a name-dropping douche, but I think some of the opportunities I’ve had at rock shows are worth discussing.

One of these took place at the Tabernacle in Atlanta on Tuesday, April 21, when I was invited to go see Sleater-Kinney by their drummer, Janet Weiss. Janet and I go ‘way back,’ as she is a long-time fantasy basketball player and has followed my work for 10 years or so. Weiss has drummed for some big names over the years, including Stephen Malkmus (Pavement), Conor Oberst, the Shins, and Quasi, as well as holding down the beat for SK, who are currently killing it on a reunion tour. 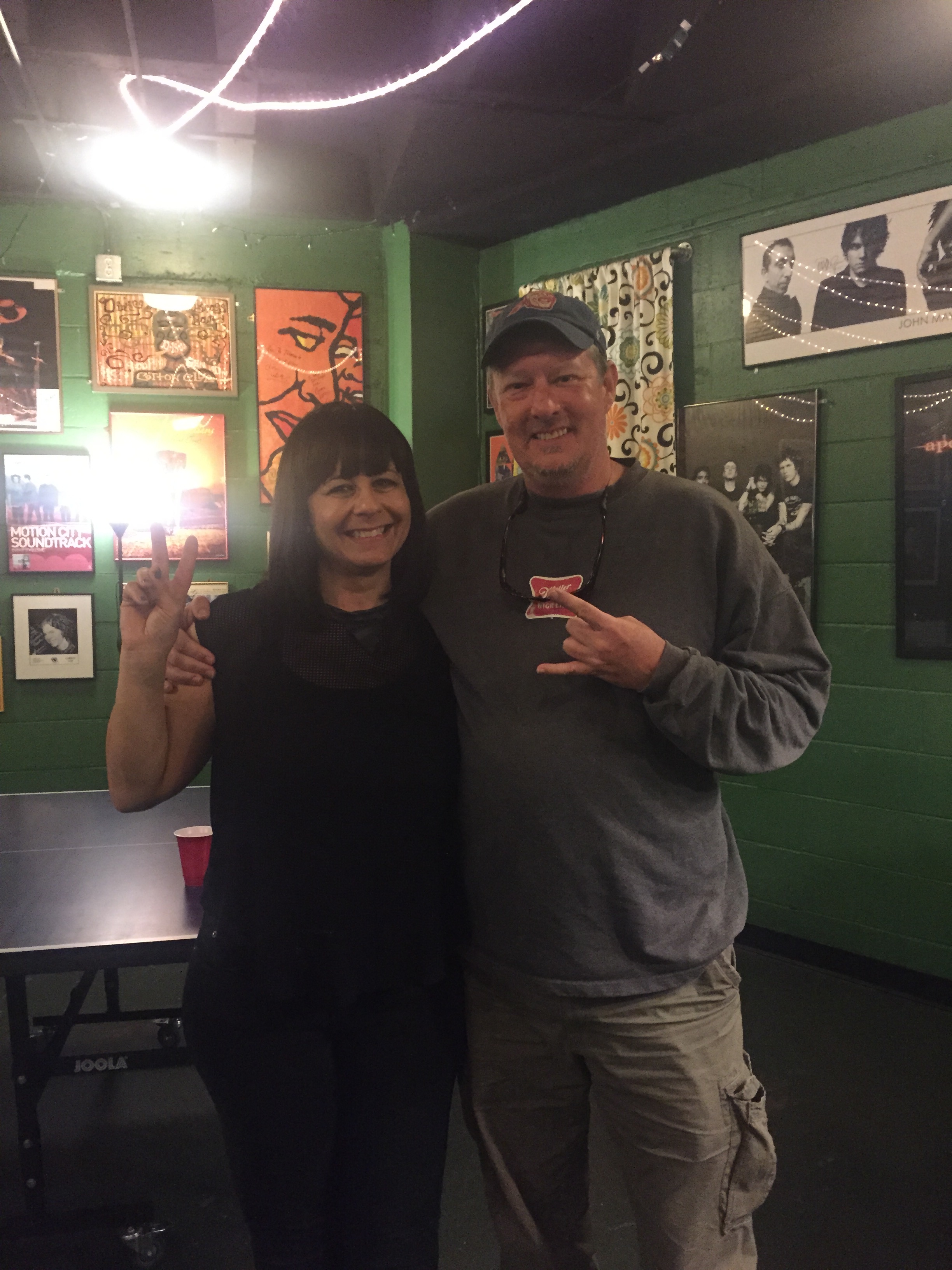 through Atlanta. Tuesday was no exception, and my friend Alison King and I battled horrific ATL traffic to make our way down to the Tabernacle for the show. These days, in my advanced age of 47, I usually have more interest in hanging out with my rock star basketball buddies than trying to get close to the stage and deal the scene, but I always find always find a seat and take in the show before going backstage.

SK put on a pretty amazing rock show that night. They played new songs, classics and rocked with the enthusiasm of teenagers, and the crowd ate it up. The sound was crystal clear, the hand-sewn tapestry that backed the stage provided an ever-changing backdrop, and the band was dialed in. They killed it.

After the show Alison and I found our way through the hallways that feel like tunnels leading to the backstage area and hooked up with Janet and company. When we entered the room, Corin Tucker immediately got us drinks, we were introduced to Carrie Brownstein, who is now more famous for her hit IFC show, Portlandia, as well as her American Express commercial, than she is for being in one of the coolest bands on the planet. I’m not going to say I was star struck, but it’s not every day I get to hang out with a TV star, and it was shaping up to be an amazing night.

There was also a vaguely familiar blonde woman in the backstage area and the band was very interested in talking to her. It wasn’t Debbie Harry or Stevie Nicks, but I could tell she was a superstar. I ran into Janet at the bar and asked her who the unknown celebrity was, and she informed me that it was Cindy Wilson of the B-52’s. I took my phone out and started taking pictures of the band as they posed with the Georgia icon, and then tried to stay within earshot of her to catch some of the cool stories she was telling about the Athens and Atlanta music scenes in the 80s and 90s, which was the heyday of the B-52’s. 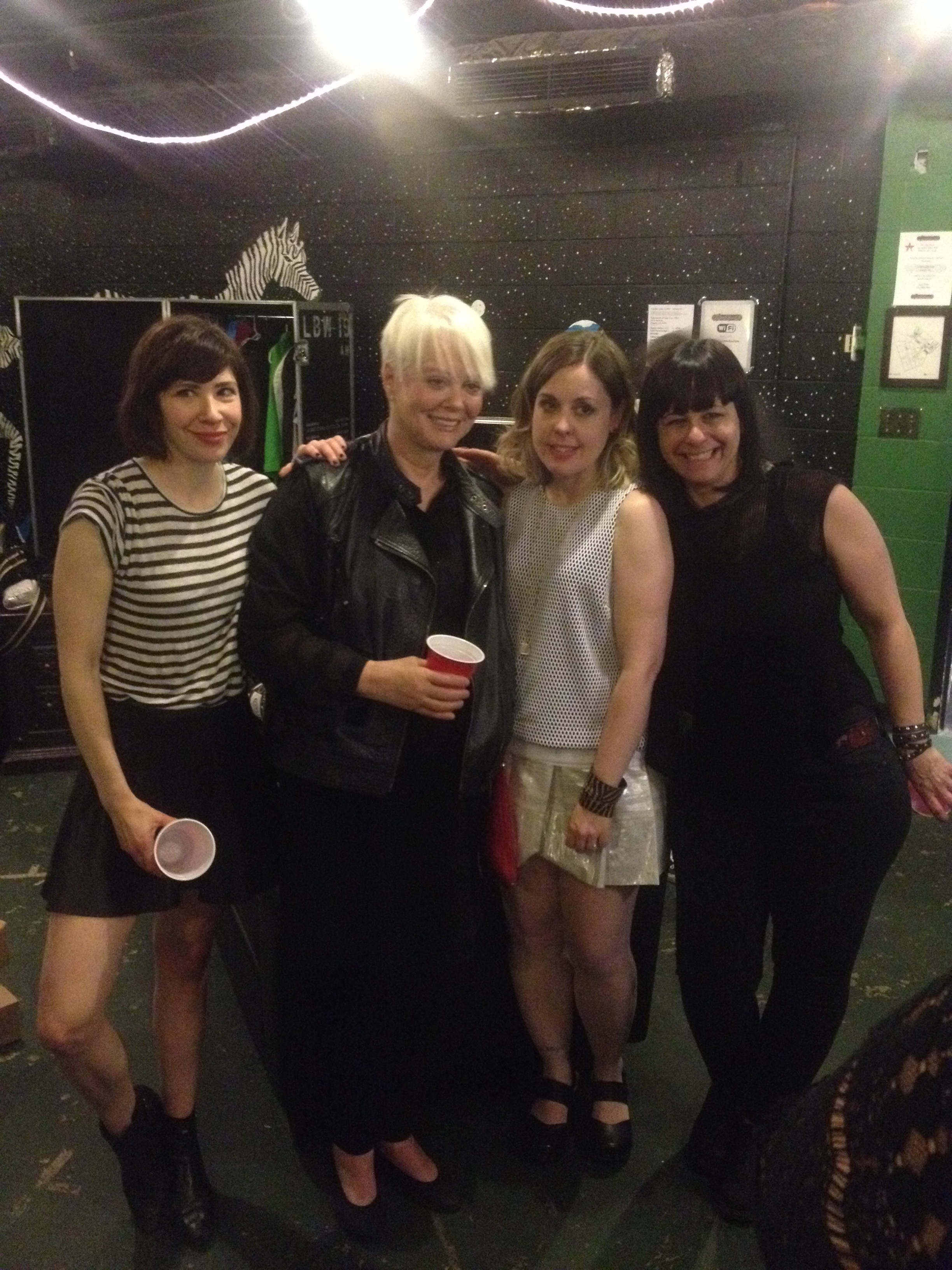 I don’t want to get into details about her stories without her permission, but I will say she was engaging, funny and fascinating to listen to. And it was fun watching the SK gals lining up for pictures, enjoying her stories, and just being flattered by the adulation she was pouring on their band.

While I didn’t bother Cindy for any photos with me and my concert buddy, I did get some sweet shots of SK and her together, as well as a shot with Janet and a group photo with the band.

In summary, it was one of the best times I’ve ever had at a show and it was great seeing Janet and talking some basketball (and life) with her. She actually beat me this year in our fantasy basketball league, which was won by Malkmus and also included Doug Martsch from Built To Spill, and several other rockers.

I never imagined a career in fantasy sports would lead to me getting to hang out backstage with rock bands, but that’s exactly what happened, as indie rockers love them some fantasy hoops. A great time was had by all and Georgia’s rich musical history often means you’ll see famous celebrities at shows, in addition to the band you’re paying to see. And if you’re lucky and the stars align, you might even get to hang out with them.

Vintage Computer Festival Returns to Roswell on May 2 & 3

Five Unsigned Artists We Haven't Been Talking About

Pijiu Belly - Introducing an Asian-Inspired American Pub on the Westside