Anytime you see the words “beer-pairing-meal” run towards wherever is happening. This past Thursday, May 25, Tavernpointe hosted this very type of meal alongside Orpheus Brewing. The purpose was to showcase a few new Orpheus beer unveilings alongside meal options that would bring the best out of both- the food and the drink. The evening also celebrated the upcoming two-year anniversary of Orpheus Brewing’s entrance into the world.

Chef Sid Blackwell did an incredible job of shaping a five-course meal that opened with a “House Cured Bacon Lollipop” and ended with a blubbery crisp style dessert that brought the anticipations of summer even closer to the heart. With each course, a different Orpheus Brewing beer was paired alongside, which helped to showcase the subtle notes of the beers in addition to the dynamic primary flavors. Also, in the first course, Madison Burch (the self proclaimed “booze lady” or “Bar Director”), prepared a specialty cocktail which used the “Atalanta Tart Plum Saison” along with splashes of vodka, liqueur, kiwi, and a dash of dill which brought an herbal note that felt healthfully tasty…well done Madison. The Atalanta on its own was enthusiastic, serving as a segway between spring and summer as floral notes bounced on the tongue amidst the sparkling champagne-like 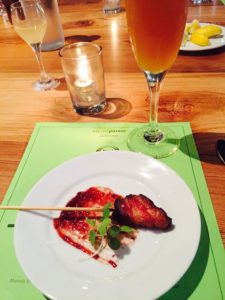 effervescence. This is a go to beverage as the hot Summer days approach.

Each course was a true highlight, but nothing could compare to the “Spicy Basil Beef” which was accompanied with rice and a sesame braised kale. The beef was deliciously tender and had plenty of kick to keep you motivated to stay in the ring with this heavyweight champ. The kale cannot go unnoticed either, as it provided a nice balancing act which cooled the tongue amidst the battle with the spicy beef. Paired alongside the beef, was Orpheus’ “The Rites”, which is an American style IPA that contained a nuttiness and full flavor with a touch less bitterness than is usually expected with an IPA…this beer can easily be recommended to even non-IPA drinkers.

In addition to the fine food and drink, the people weren’t so bad either. Anytime the legendary, beer aficionado extraordinaire, “Ale Sharpton” is in the room, you know you’re in the right place, and he even served as a guest MC at times to provide commentary to the food and beer alongside Chef Blackwell. The staff at Tavernpointe are also second to none. The crew behind the bar- Madison, Lucas, and Joey will keep you in the right frame of mind with their jovial personalities matching the rhythmic ambiance of the setting itself. All evenings at Tavernpointe are enjoyable, but Fridays are especially a hit and anytime there is live music on the outside patio.

As mentioned in the beginning, there is nothing bad that can come from great beer and great food, other than perhaps the let down of trying to cook on your own the next night and failing miserably. A huge shout out to the folks of Tavernpointe and Orpheus Brewing. Orpheus is coming up on their second Anniversary this Memorial Day weekend (Event Link), and they will have a handful of specialty beers that disappear just as soon as they appear, so make plans to enjoy them while you can.

Isn’t the Atl fantastic? Great food, great craft beer and the Superbowl coming to town. What a city. 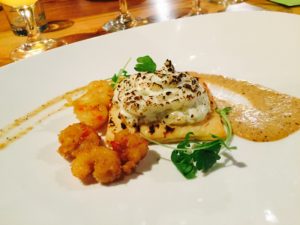 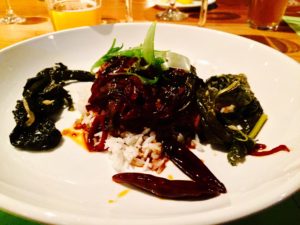 Favorite Beer of the Evening: “Serpent Bite”. Light, crisp, and just sour enough to make me pay attention. Great with seafood and anything related to BBQ. 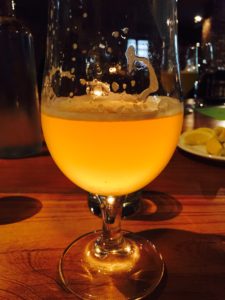 Breaking the Shackles Brings Awareness to Human Trafficking in Georgia