Yahoo – Earlier this week, Georgia’s Senate passed House Bill 757, a so-called “Religious Liberty” bill. The bill allows faith-based organizations or individuals to refuse service to gay couples on religious grounds, and allows for such organizations to refuse to hire or retain employees whose “religious beliefs or practices or lack of either are not in accord with the faith-based organization’s sincerely held religious belief.” The bill’s supporters are hoping Georgia joins the dozens of states who are sanctioning LGBT discrimination by dressing it up in religious garb.

(Sit tight, we’re getting to the sports.)

The bill’s been wending its way through halls at Georgia’s state Capitol for years, and along the way has picked up some powerful enemies. The Metro Atlanta Convention and Visitors Bureau has said the negative economic impact on the state as a result of the bill could be $1 billion to $2 billion. Home Depot, Coca-Cola, Google and Microsoft have all opposed the law, as have the Braves, Falcons, and Hawks.

Enter: the NFL. Atlanta Falcons owner Arthur Blank is in the process of building a $1.3 billion stadium with the express intent of luring multiple Super Bowls to Atlanta. The city has not hosted one since 2000, when the then-St. Louis Rams defeated the Tennessee Titans.

Atlanta is on the short list for a Super Bowl in 2019 and 2020, and recent history suggests that an opulent new stadium makes it the front-runner. But on Friday, the NFL sent Atlanta Journal-Constitution writer Jeff Schultz a clear statement on how the law would impact Atlanta’s standing in the eyes of the selection committee:

“NFL policies emphasize tolerance and inclusiveness, and prohibit discrimination based on age, gender, race, religion, sexual orientation, or any other improper standard,” NFL spokesman Brian McCarthy said. “Whether the laws and regulations of a state and local community are consistent with these policies would be one of many factors NFL owners may use to evaluate potential Super Bowl host sites.” 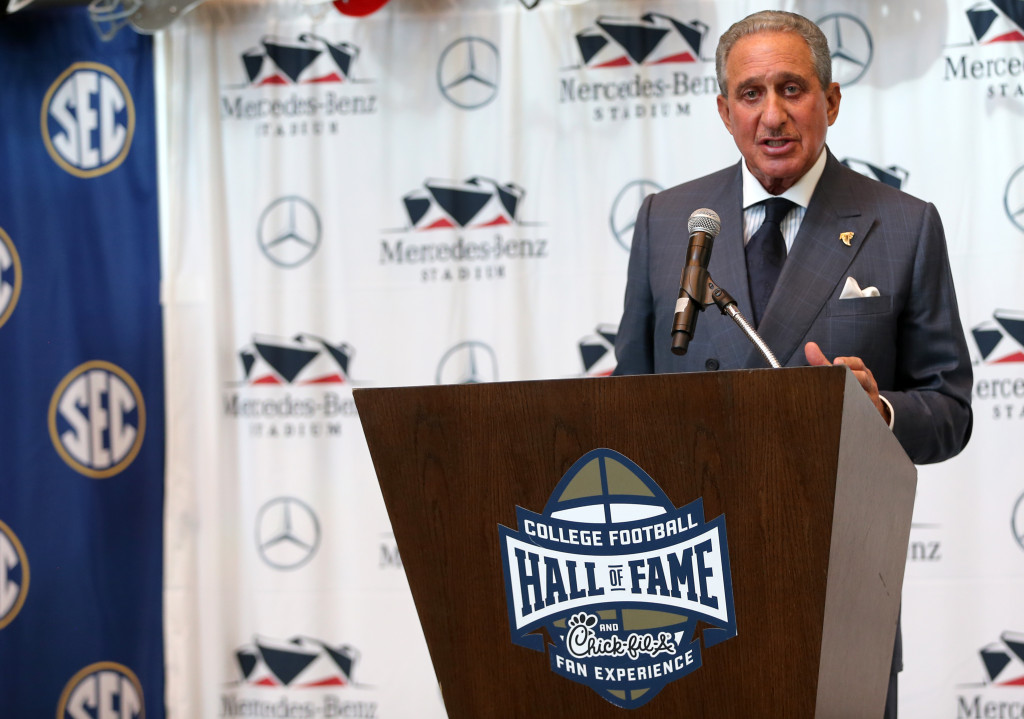 This isn’t an idle threat. The NFL yanked the Super Bowl from Arizona in 1993 after the state refused to recognize Martin Luther King Jr.’s birthday as a national holiday. And when Arizona was considering its own version of a “religious freedom” bill in 2014, the NFL offered a similar anti-discrimination statement. Gov. Jan Brewer vetoed the bill soon after that. Atlanta also risks losing its 2020 Final Four; the NCAA has warned Indiana that it faces the loss of future events because of Indiana’s own “religious freedom” law.

Much like a basketball team that dominates its own tiny conference and then finds once the NCAAs roll around that it’s no match for the broader world, Georgia politicians are learning that what plays well in high school gym rallies back home doesn’t wash with a world that’s already moved into a new era of acceptance.

The NFL and NCAA care a lot more about the vast numbers of Americans who realize that it’s 2016 and gay people aren’t scary demons than the fears of provincial politicians and their constituencies. As the calendar changes and the past fades, more and more Americans are seeing “refusal to serve based on religious grounds” for what it is: discrimination, plain and simple.

Put simply: imagine someone refusing, on religious grounds, to serve certain people based on the color of their skin. (Or suppose a Muslim-based or atheist-based business decided to refuse to serve Christians.) The response would be thermonuclear.

The NFL’s presence in this debate will fire up those who howl they don’t want politics in their sports. But sports aren’t a refuge from society; they’re the predictor of it. Baseball—and, even in the South, college football—integrated long before the rest of America did. Women achieved respect on the courts long before they did in the workplace. The next athlete to come out will find it that much easier to do because of players like Michael Sam. In sports, your background (usually) doesn’t matter as long as you can play the game; it’s a sentiment that’s working its way through society at large.

The Religious Liberty bill still awaits Gov. Nathan Deal’s signature before it becomes law. Earlier this month, Deal, a Republican, offered a strong rebuke of those who would claim religious victimization and biblical justification as an excuse for discrimination: “What the New Testament teaches us is that Jesus reached out to those who were considered the outcasts, the ones that did not conform to the religious societies’ view of the world,” he said. “We are not jeopardized, in my opinion, by those who believe differently from us.”

Anger crossbred with fear is the most potent fuel in American politics today. If Atlanta ends up watching as Tampa or New Orleans hosts the Super Bowl in 2019 and Phoenix or Dallas hosts the Final Four in 2020, there’ll be plenty of anger to go around. The advocates of Georgia’s Religious Liberty bill will point to the usual targets: the media, progressive groups, those not-from-around-here sports leagues … everyone but the ones who really deserve the blame.

The City Too Busy To Hate would lose out to The State Hanging On To Hate.

Tell us what you think, leave a comment below.

Netflix documentary "The Art of Organized Noize" drops on Tuesday