Man, was I especially thrilled to have a Genesis G80 pull up in my driveway. More on why in a second.

Hyundai’s luxury spin-off now faces stiff competition from established luxury powerhouses; especially in the mid-sized sedan space, where the G80 faces off against the Mercedes E Class, the BMW 5-series, and the Audi A6.

Normally, I’d be extremely nervous for a newcomer to face down the Teutonic titans. Hyundai’s Korean neighbors Kia, for example, poured the GDP of a small nation into developing and marketing their entry, the K900, and the results were cringe-worthy; for every K900 Kia sold, Mercedes sold nearly 40 E-Classes. And I don’t feel bad for them; the K900 totally missed the mark; it was lethargic, un-fun to drive, and barely better than the much cheaper Cadenza. The Germans had no reason to feel threatened.

So maybe the G80 will stand a chance if it’s actually good. And I had a special reason to believe it would be; it’s budget-friendly baby brother, the 2017 Elantra, kicks ass. Sporty, confident, fun, reliable, comfortable, brilliant, for under 20 grand.

I’m thrilled to report that the G80 was an equally impressive surprise.

The very first thing I and many of my friends riding shotgun noticed was the silky ride quality. The G80 absorbed potholes on the woeful Dekalb Ave with ease, leaving us relaxed as we blasted the Sirius Chill station through the solid, 17-speaker surround sound. 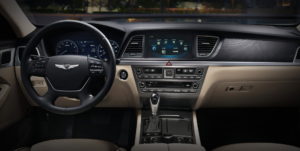 Sport Mode impressed as well. Steering, suspension, and throttle response sharpened, the car leaped to 60 decently quickly (~6.5 seconds) and took corners confidently. Not the agility you’d find in an E-class or especially a 5-series, but impressive nonetheless.

Downsides? This car chugs gasoline. With a mix of Sport Mode shenanigans and highway cruising, I averaged <14 MPG, and I was in the more economical 3.8L V6 model; I can’t imagine how thirsty the V8 is. Weirdly, the car also defaults to AM radio every time it’s turned on, so the soothing Genesis jingle that plays after ignition is swiftly followed by a blast of muffled static. Other reviewers also pointed out how annoying this got after just 3-4 startups. One can hope that a dealer update will fix this senseless issue soon.

But all is forgiven when you see the price tag. Judging by the strong design, uncompromising interior quality, and long list of bells and whistles, I guessed this car would’ve fallen between $58-65k; similar to a well-equipped E-Class or 5-Series. But no; the handsomely-equipped base model of the G80 is just a tick above $41,000.

That is a staggering bargain for a car this good.

So while Audi, Mercedes, and BMW can certainly ride on brand loyalty for the next decade, they’d be smart to realize that the G80 is no K900; it’s a threat to be taken seriously. Hyundai and Genesis have created a car that’s 90% of a German luxury sedan for 75% of the cost.

Anyone in the market for a luxury mid-sized sedan should absolutely take a Genesis for a test drive. You may find it more appealing than the mainstay offerings, or even just appealing enough to pocket the nearly $20,000 savings over the competition.

As I passed an A6 on 75 the night before handing the keys back, I thought of the climax of the movie 300, when King Leonidas hurls a spear, slicing through Xerxes cheek to prove he’s not a god. As I catapulted past the A6 driver with a bigger grin than him, I couldn’t help but feel that Hyundai have just dealt a similar blow to the “invincible” Germans.

"Atlanta" Gets Nominated for Two Golden Globes in 2017